Anybody care to guess whom PFF says is Georgia’s top rated returning player?

SEC StatCat does a nice breakdown on the conference’s top two returning quarterbacks.

ICYMI: Looking at their advanced stats, not much separates JT Daniels and Matt Corral, but one pretty big shortcoming is ruining one passer’s case for honor of QB1.

Who ya got: Corral or Daniels ?https://t.co/O0RsvZQAHN

You can read the details at the link, but essentially what he calls into question is Daniels’ deep ball accuracy.  That’s not exactly a surprise; we’ve all noticed Daniels’ mechanics need work in that regard.  The good news is that between being a year removed from the injury and having plenty of time to work on his footwork under Monken’s direct supervision, the odds are pretty good that he improves.

In any event, at least early on, you have to think Ole Miss and Georgia have a leg up offensively on the rest of the SEC because of whom they return at the most important position on the field.

You can look at this Bulldogs Illustrated piece that poses the question about how close Georgia’s offense under Monken is to becoming elite.  My impression is that your guess is as good as mine, but that’s not what this post is about.  Instead, I took that as a jumping off point to look at Georgia’s scoring in the context of the SEC over the past nine seasons, from peak Bobo, through Schottenheimer (sorry), Chaney, Coley (sorry again) and now, Monken.

Here’s what it looks like (conference games only stats via cfbstats.com).

There’s a clear line of demarcation there, and it’s the 2018 season.  Mike Bobo’s magnum opus, the 2014 season, when Georgia finished first in the conference in scoring (and eighth nationally) would barely rate as a blip behind the conference leaders of the last three seasons.  Forty is the new thirty.

I get that things have to improve in some of the areas the author of the linked piece mentions, but the real starting point is that Smart has to realize he’s tying one hand behind his back if he still thinks he can play by the old normal.  Georgia needs to get into the mindset that averaging forty points a game in conference play is what it takes to win championships these days.

That’s something that begins with the head coach.  Hopefully, Kirby’s figured that out.

Yeah, I know G-Day is G-Day, so the passing explosion doesn’t mean so much in the vast scheme of things.  That being said, I didn’t see a shutdown corner emerge.  And I did see a fair number of receivers make plays.

Here are some sobering numbers about Georgia’s secondary.

How important is secondary depth to #UGA (and most SEC/CFB teams)?

Outside of Auburn, where Mike Bobo stubbornly calls plays, the SEC is a passing conference and the better defenses have better secondary depth.  We’ve already seen Georgia bring in one experienced defensive back in Tykee Smith.  There are more to come, I feel like.  Maybe Smart decides he can roll the dice on one freshman starting cornerback, but two?  Nah, no way.  And those numbers say the two-deep needs to be… well, deep.

What we saw on G-Day was a combination of green, talented DBs and experienced ones who’ve had the chance to be significant contributors before this season but, for whatever reason, never showed out.  All told, do you think after watching the tape that Smart and Lanning are standing pat with what they have rolling into the opener against Clemson?  I’m not feeling it.

Watch the portal.  Especially now that one-time transfers are free.

Filed under Georgia Football, Stats Geek!, Strategery And Mechanics, Transfers Are For Coaches.

The folks at Athlon get together to discuss the outcome of the Cocktail Party and the conclusion, based on stats like these…

… The Dawgs ranked in the top 40 in FBS last season in each of the five defensive metrics I look at closest: yards per play (10th), points per drive (26th), success rate (33rd), expected points added per play (34th), and yards per pass attempt (39th). The Gators ranked no better than 62nd (points per drive), and as low as No. 102 (EPA/play). Georgia also ranks No. 2 nationally in average 247Sports rating on its current roster (.9355, including transfers and other departures), and ranks in the top six nationally in every position group, including No. 1 at running back (.9548) and linebacker (.9645). In CFB Winning Edge Roster Strength, which adjusts 247Sports’ raw talent projections for experience and career production, Georgia has the No. 1 offense, No. 2 defense and No. 1 overall roster. Florida is very talented as well, but the Gators rank No. 8 in average 247Sports rating (.9120), and the gap between Florida and the Bulldogs is larger than the distance between the Gators and No. 19 North Carolina (.8921). Florida ranks 15th at quarterback (.9384) and offensive line (.8872), and 16th among defensive back units (.8937). Weighted for experience and production, Florida ranks No. 12 in Roster Strength with the No. 15 offense and No. 6 defense – very good, but not elite.

… is that Georgia is a unanimous choice to prevail.

Of course, they didn’t take into account Dan Mullen’s assurance that Todd Grantham’s fixed the Gators’ defense, so maybe we should take those stats with a grain of salt.  Or not.

All this recruiting vs. development crap misses a big point — sure, it’s nice to win a “which team had more players drafted” debate, but ultimately, that’s not what they’re paying Mullen and Smart the big bucks for.

I’ll take a wins gap over a draft pick gap every day of the week and twice on Saturdays.

As of right now, anyway. 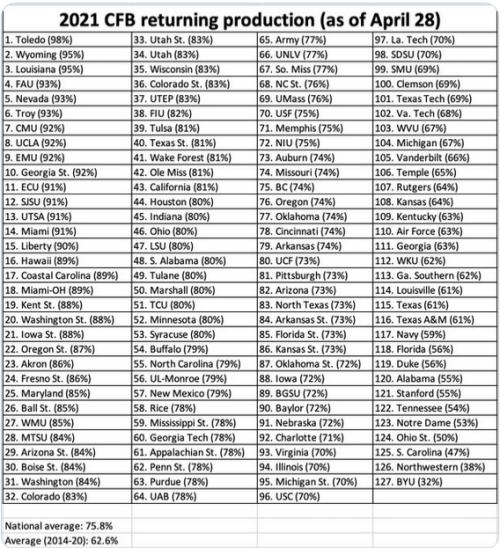 The first thing that catches my eye there is at the very bottom — the average for 2021 is much higher than it’s been in the previous seven seasons.  I would think a big reason for that is the NCAA’s decision to give players an eligibility mulligan for last year.

The second thing of note is that eight SEC teams, including Georgia, rank 105th or lower.  Now, there’s returning production and then there’s returning production.  Nobody’s arguing that Vanderbilt and Alabama are even close to being on the same footing.  Even so, returning to the first point, note that only one of those eight teams, South Carolina, returns less than 50% of its 2020 production.  A rising eligibility tide lifts all boats.   (Except maybe BYU’s.  32%?  Yeesh.)

Also, remember that besides the issue of overall roster quality, Bill has always maintained that returning production matters more at some positions than others ($$).  For example,

As it turns out, continuity up front, as measured by your percentage of snaps returning, has a pretty hefty impact on your year-to-year progression or regression.

… Returning production in the secondary ends up accounting for about 59% of your overall statistical change, a monstrous amount compared to linebackers (minus-33%) and defensive linemen (minus-8%).

That last point might make you a little nervous about Georgia’s fate this season, but it’s worth keeping in mind that it’s unlikely Kirby Smart is done fishing in the transfer portal.  I presume Bill’s numbers will be revised at some point once final rosters have been assembled for August camp; it will be interesting to see how those shake out, now that the NCAA has approved free one-time transfers.

Outlier in, garbage out

As if we needed much confirmation on the subject, Allen Kenney reminds us that these preseason computer rankings that are cropping up now are constrained by the data they’re being fed.

Analytics and college football fandom have a tempestuous relationship. If a system spits out a favorable projection for your favorite squad, it’s gospel. When the computers foretell doom, the nerds must be tinkering with their numbers to screw your team specifically.

The stats geeks will leave fans falling in and out of love all over again this year. The coronavirus-inflicted chaos of 2020 yielded screwier data than usual. Meanwhile, programs are navigating the new terrain of the transfer portal and changing guidelines on transfer participation. Oh, and the NCAA ruled that no one used a year of eligibility in ‘20, meaning that rosters might look pretty funky in the fall.

Other than that, these projections are perfect.

As you can imagine, ESPN is getting a ton of pushback regarding its preseason FPI rankings, primarily over Mississippi State’s lofty number eight position.  Despite the neutral definition ($$) (“What’s FPI? The short answer is that it’s our statistical rating and projection system for every FBS team in college football”), the defense of the pick gives the game away.

Offensively, there’s reason for optimism too. To be clear: FPI does not think Mississippi State’s offense was good last season. It ranked 94th in efficiency. But still, it does believe coach Mike Leach and the Bulldogs’ offense will improve this year, in large part due to their experience at quarterback. Mississippi State will likely have either Will Rogers (who threw over 300 passes for the Bulldogs last year) or Jack Abraham (who played three seasons at Southern Miss) under center. Even though neither has previously been anything particularly special, the way FPI sees it: Players with a lot of experience (Abraham) or earned experience young (Rogers) are likely to improve a good bit, and the chances that one of them plays much better is quite high.

Uh hunh.  Lotta projection there, fellas.  I didn’t know computers had so much imagination.

As a foil, take a look at another preseason ranking I came across yesterday.  It, too, has a fairly mundane description.

But check out the rankings.

The point here isn’t to pick and choose which is a better assessment.  It’s that any preseason projection, coming off of what has to be one of the most anomalous years in college football history, is little more than a crap shoot.  It’ll take a few weeks’ worth of games to get a good feel for who’s got what in 2021.  Hang on to that grain of salt for a while, in other words.

This is how you portal.

But, “something something I’m a redshirt freshman. I’m not playing…”

Filed under Georgia Football, Stats Geek!, Transfers Are For Coaches.