Be prepared to pick your spots to have a conversation in Sanford Stadium soon.

A new sound system has been installed to improve sound quality in all areas of the stadium.

Hey, nobody said the collegiate atmosphere couldn’t be ear-splitting.  Besides, with the in-stadium upgrade to telephone services, you can just text your neighbor if he or she can’t hear you.  Now that’s a win-win!

First, McKenzie, the 5-foot-7 receiver-returner from south Florida. During Tuesday’s practice McKenzie caused a stir with a move he made: He caught a pass in the flat, then made a couple guy’s miss, according to quarterback Hutson Mason.

“It was real nice. It was smooth,” Mason said.

The reaction by defensive coordinator Jeremy Pruitt made Mason chuckle.

“Coach Pruitt goes: ‘Oh my God!'” Mason said, imitating the coach. “With that redneck twang: ‘Oh my God!’ It was pretty funny. But yeah, (McKenzie) is one of those guys you just throw him the ball and kind of let him do his own thing.”

I’m not sure I’m gonna be able to take much more of this.

As you might expect, Bill Connelly’s Auburn preview is a fun read (“You’ve got to be able to say this, Auburn fans: We were lucky as hell last year.“).  What you might not expect is how much weight is being given to Auburn’s schedule this season.

Let’s put it this way: Auburn travels to Manhattan, Kan., on a Thursday night on national television, to face a raucous crowd and a team that has specialized in slowing Baylor down more than most. And that’s perhaps Auburn’s fifth-hardest game in 2014.

Well, dayum.  I don’t see Auburn finishing anywhere in the vicinity of scraping by with bowl eligibility.  Then again, Bill makes me wonder if the narrative about this year’s SEC West hinted at yesterday in my post about the Athlon article may have some legs.

And here’s another dude decked out in red. 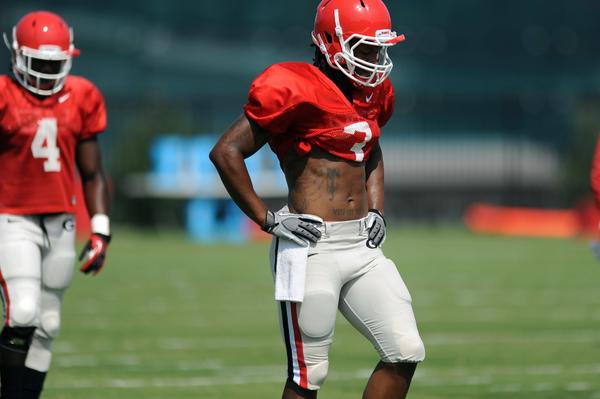 Gurley’s gonna be something this year.

I could have done without reading this.

Not what I wanted to see this morning:

On Monday QB Hutson Mason sat out throwing drills during the open media period. It appeared there could have been any number of reasons why (throwing competition for the backup QBs), but as it turns out Mason had a slightly sore arm.  Mark Richt is going to get this team to the starting gates in full form if he can. That’s the reason Mason sat out some throwing drills yesterday.

Or the first day of the regular season.

Mason isn’t Georgia’s best player.  But he may be Georgia’s most indispensible one.

It’s not easy being green.

A thought occurred to me as I was reading preseason camp stories – we know what a disaster Georgia’s inexperienced secondary was last year and we’re aware of how much Pruitt is concerned about finding defensive backs who will be ready to play in his system in just a month.  But life sure sounds different elsewhere.

Take South Carolina, for instance.  The Gamecocks may be one of the few SEC teams that will field an even greener secondary than Georgia does this season, with three true freshmen, two of whom weren’t even admitted to school until last week, vying for starting time.  And yet the reaction to that lies somewhere between a shrug and a yawn.

“It’s not a panic mode,” Brown said. “We’re prepared to get those guys ready. They’ll play for necessity, because we need those guys to play. But they’ll also play because they’re projected to be really good players. We’ll have enough time to get them ready to play.”

South Carolina coach Steve Spurrier said it hasn’t taken the freshmen long to adjust. They’re already rotating first-team reps in practice, even before players put on their pads for the first time this preseason.

Meanwhile, over in Tuscaloosa, Kirby Smart finds himself working two true freshmen cornerbacks into the mix ASAP.  No worries, mon.

… There’s a buzz about Tony Brown, the No. 2 cornerback in the class who enrolled early. Hoover’s Marlon Humphrey, the top-ranked corner in the class, is getting acclimated after arriving this summer.

Both have veterans who’ve started games to beat for jobs, but Smart said playing time at that position isn’t necessarily tied to seniority.

“I wouldn’t say that’s the toughest position (to learn quickly) for the players in our system, because a lot of what you get is dictated by the formation of the offense,” Smart said. “You can give them that information, we don’t ask them to understand a lot of the checks and system they have to get through communication. They have to understanding the word that the safety is calling.”

Now I realize that some of this difference in attitude can be chalked up to coachspeak/spin/blowing smoke.  But there also seems to be a legitimately higher level of anxiety in Athens than elsewhere.  Is that justified?  Or merely being prudent?