The new face of unsportsmanlike conduct

Really, college football?  This is what you have to zealously guard against?  Jeez, maybe it’s time to revisit the rule, or at least give officials a little more discretion as to when it’s right to throw a flag.

Gary Patterson, who I consider one of the better balanced people in the coaching profession, spent time in his post-game presser after TCU’s loss to Oklahoma bitching about Baker Mayfield.  Not about his play during the game, mind you, but about how Mayfield and his family hurt Patterson’s fee-fees when they had the audacity to complain to the press about TCU blocking his transfer out to another Big 12 program.

‘I got a quarterback who writes a whole article on me, how I treated him wrong, but I can’t talk about officials,” Patterson said after the game Saturday night.

I swear, if coaches were given the choice of paying players as long as they got even more control over their lives, they’d take that deal in a heartbeat.

In case you hadn’t noticed…

With its win over FSU yesterday, North Carolina has now won four straight since losing to Georgia in the opener.  The real eye-catcher is Mitch Trubisky’s passer ratings in those five games:

Ahem, one of those numbers is not like the others.

For the season, Trubisky’s passer rating is 182.65, good enough for sixth nationally.  Kinda makes you understand why Fedora wouldn’t abandon the passing game against Georgia, even when UNC was doing well running the ball.

Maybe there is a little hope for the pass defense now that the class of quarterbacks it’ll be facing drops off a little.

One other thing about this — at Sanford yesterday, they put up some live action from FSU-UNC during a game break and I couldn’t help feeling jealous over how much time Trubisky’s line gave him to throw.  “Can you imagine,” I said to myself, “what Eason could do with a little more time?”  I guess I found out on Georgia’s last drive. 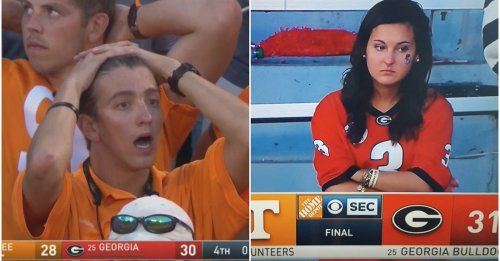 The thing that really killed me about watching them blow the game on the last play was that it destroyed how well they had played just before that to set up having my heart ripped out.

Tennessee, remember, could have locked the game away by converting one first down on its penultimate series after Eason threw the pick, but it failed to do so.  That was the first thing that had to happen, and the defense did its job.

The offense, in turn, after sputtering for much of the fourth quarter, faced a do or die 81-yard march to take the lead.  And it did, remarkably.  Even more remarkably, it did so by executing at a very high level, with one exception, and even in that case (the false start penalty by Catalina), Kirby limited the damage because he had tucked away his third timeout during the previous Tennessee series and avoided having 10 seconds rolled off the game clock then.

Then came Eason’s touchdown pass to Ridley.  When you watch a game live from the stands, there are only so many things you can focus on as you watch a play develop.  In my case, I was watching the line and Eason.  Stunningly, the left side of the line handled the UT blitz perfectly and created and held the pocket, which Greg Pyke got off the block of the game by shoving aside a Vol rusher.  That gave Eason the time he needed to step up in the pocket.  He was composed.  His mechanics were flawless.  He saw the open receiver and he let fly with a perfect pass that led Ridley into the end zone.

The only thing I didn’t know from seeing it was how Ridley got so open in the first place.  I mean, Tennessee knew Georgia had to go deep at some point in time and was playing the safeties back.  So when I got home and after watching the end of the Clemson-Louisville game, I fired up the DVR to find out.

It turns out that Gary Danielson’s analysis of the play was wrong.  The Tennessee cornerback didn’t give up on the play, or Eason’s arm.  He got baited by Ridley, who slowed down briefly and kicked it back up to full speed to create separation on the play.  It was perfectly done.

In a season in which we’ve been complaining about the receiving corps needing to step up and the coaches needing to coach up their charges, we may have just seen proof that good things are starting to happen.

I just wish they could have happened for about another ten seconds last night.

Missed it by that much.

Georgia fans don't wanna look at this one. Them Dawgs have been on wrong side of two of the four least-likely comebacks in the last decade pic.twitter.com/OIggrypaZp

After the game, I commented to my friends that it’s rather stunning to me recounting the steady stream of heartbreaking endings I’ve witnessed over the past few seasons:  the 2012 SECCG, Auburn 2013, Georgia Tech 2014 and, of course, last night’s gut wrencher.

I know some of you find the games when Georgia simply failed to show up as being the most unforgivable of sins, but it’s these snatching defeat from the jaws of victory that bug me the most.  (I’m still not over being five yards away from a chance to see Georgia play for a national title.)

I do think losses like these are as much about fate as they are about a team’s resiliency. Think about what it took for Tennessee to even be in position to throw a Hail Mary:  Georgia being flagged for excessive celebration for a player forgetting to put his helmet on before stepped on the field after the most exciting play of the last two seasons and an offsides penalty on the ensuing kickoff.  Dobbs needed every inch of those twenty penalty yards to be able to make a well-placed throw to the end zone on the last play of the game.

Tennessee fans who think that play was payback for the Hobnail Boot game in 2001 miss the real analogue to last night, Georgia’s comeback overtime win in Knoxville in 2013.  Had Pig Howard held on to that ball just a little bit longer — or not tried to stretch his way into the end zone in the first place — Tennessee likely winds up scoring in overtime and the game proceeds in a drastically different way.  Such is the way kicks in the nuts happen.

As I said yesterday, sometimes it’s just the other guy’s year and you can only tip your cap to that.  It doesn’t mean you don’t hurt just as much, though.

Doozy from the AP in our image tool. pic.twitter.com/sps5KJQVgq

Bobby Petrino looks like somebody who just witnessed a bad motorcycle accident.

I guess that’s one way to react to a loss.

I take it Reggie Wilkerson’s not buying in to the new coaching staff.

Was not about UGA per someone very close to him. Rememeber he has friends on a lot of other teams. Read this: https://t.co/U04R47aq2C https://t.co/iFZr67GLc1

It’s not us he’s got to convince.

Filed under Georgia Football, Social Media Is The Devil's Playground