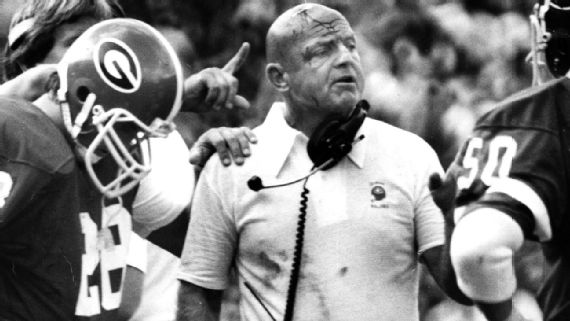 David Hale tells the story behind that iconic photograph.

IT’S IMPOSSIBLE TO know who authored the first inept head-butt in coaching history, but it’s safe to say it was former Georgia defensive coordinator Erk Russell, who set the standard by which all modern mishaps should be judged.

Throughout the 1970s, Russell had a pregame tradition with his defensive linemen in which players huddled around the coach in what he called “the bull ring.” Russell would point to a lineman — the bull — who would then charge the coach. Russell would mash his bald scalp into the player’s chest and shoulder pads, lifting the player into the air with his arms. From outside the huddle, it looked violent, but Russell had his technique down and no harm was done — until the Dawgs’ 1979 game against South Carolina.

That day, Georgia was down a few linemen due to injuries, so Russell had one of his linebackers, Robert Goodwin, move to D-end. Goodwin had seen the pregame ritual before, but like most people who had witnessed the spectacle, he thought Russell delivered a genuine head-butt. So, when they all lined up in the bull ring, Russell called out Goodwin’s name, and the bull charged.

“Robert comes flying in, thinking he’s head-butting,” said Frank Ros, one of Georgia’s star defenders at the time. “He comes in and lowers his head and wham!”

Worse yet, Goodwin’s facemask had been hastily attached to his helmet moments earlier, leaving the tip of a screw jutting out from the front. The screw dug into the top of Russell’s head and opened a gruesome, two-inch gash.

Russell wasn’t fazed. He wiped the blood from his head and began swiping it across his players’ jerseys before a team trainer finally intervened, sticking a butterfly bandage across the laceration.

The resulting photo of Russell, streaks of blood running down his forehead, a swab of blood staining his white polo shirt and a bandage affixed to his bald scalp, now stands as an iconic reminder of the coach’s ferocity, even if those who played for Russell knew he was hardly the madman the image evokes.

Of course, there’s a punchline to the story.

The next day, players showed up for a Sunday film review and weightlifting, and a few began razzing Russell about the injury.

“I guess you won’t be head-butting this week,” one player joked.

No, Russell said. His head-butting days were officially over.

“I got home last night,” Ros remembered Russell explaining, “and my wife said if I ever came home looking like that again, she was going to divorce me.”

Singing for their supper

Stewart Mandel ($$) shoots a couple of fish in a barrel:

In 2007, Gordon Gee, then Ohio State’s president, famously defended the BCS by declaring, “They will wrench a playoff system out of my cold, dead hands.” On Tuesday, Gee, very much still alive and now West Virginia’s president, said he has “always been supportive of playoffs” and is particularly supportive of the 12-team format model recently recommended by a working group of commissioners.

“I’d like to be playing in November knowing that we (West Virginia) have a chance to be in the playoffs,” he said.

In 2010, Bill Hancock, then the executive director of the BCS, defended that system, in part, by saying, “We believe a playoff would diminish the regular season and end the Bowl system, certainly as we know it.” In 2021, Hancock, now the CFP executive director, said, “Twelve (teams) keeps September important, and it also keeps November important.” (And, “There will always be a place for bowl games.”)

Men of principle, every one of them.  For a price, anyway.

Filed under BCS/Playoffs, It's All Just Made Up And Flagellant

The 2021 preview mag hasn’t shown up yet at my nearby Barnes and Noble, but those who ordered it directly from Steele have been rewarded with delivery.

A couple of Dawg-related notes for you…

Mike Griffith:  “Ole Miss quarterback Matt Corral — whose decommitment from USC four years ago opened the door for Daniels to determine he would reclassify and graduate early to play for the Trojans — was Steele’s choice for first-team preseason All-SEC quarterback.

Daniels, who missed the first six games of last season while still rehabilitating an injured knee, was assigned the second team.”

All told, 12 Georgia players made Steele’s four all-SEC teams.  (I probably don’t need to tell you which program had more selections.)

The genius of “and… a pony”

Florida’s AD has a three-step plan for scheduling that Andy Staples pushes in this piece ($$) as a balm for fans.  I couldn’t stop myself from laughing out loud when I saw the third step:

All kickoff times should be announced in the spring prior to the season.

I mean, sure, that’s nice.  Except the P5 surrendered control of kickoff times when they took the gold and bent the knee to their broadcast partners, so it’s nothing but pure fantasy, because there’s no way Mickey’s going to lock himself into shitty prime time matchups that would inevitably occur after some teams do better and others do worse than expected in the preseason.

This is the kind of hypothetical, like “let’s imagine what the college football playoff would look like if it was like March Madness” or “it would be so cool if college football adopted Premier League relegation”, that induces eye rolling when I see it presented on Twitter.  That a guy whom Staples refers to as an “influential” AD (one certainly knows from personal experience where the whip hand lies) indulges in the same sort of make believe is kind of sad.

Filed under College Football, It's All Just Made Up And Flagellant

Can JT Daniels win the Heisman?

That’s the subject of this discussion.

I guess I’d say it’s probably not in the cards (Rattler will likely put up crazy numbers), but I’m not really much of one who cares about the award.  What I do hope is that Daniels stays in the Heisman discussion all season and winds up in New York, because that very likely means Monken’s got the offense humming and the Dawgs are in contention for big things.

Envy and jealousy, your Daily Gator in the expanded playoffs edition

A good friend of mine (thanks, Howie!) alerted me to this gem from Gainesville Sun writer David Whitley.  He predicts good times ahead for Gator fans with the advent of the 12-team CFP.

Change is always disruptive. Among other things, Florida fans will have to adjust to the thought that losing to Georgia might not be the end of the season, if not the world itself.

That means more meaningful games, more interest and more reason for Gator fans to get out of bed the morning after losing to Georgia…

There would be life after losing to the Bulldogs. That’s a game-changer Florida fans could probably get used to.