New commissioner, same ol’ making up shit on the fly.

In case you missed what the, "honorable," @GregSankey said. pic.twitter.com/sHO5QvOgi0

Not exactly Solomonic wisdom there.

“I feel like Pedro Cerrano with Jobu anytime I talk about Georgia.” 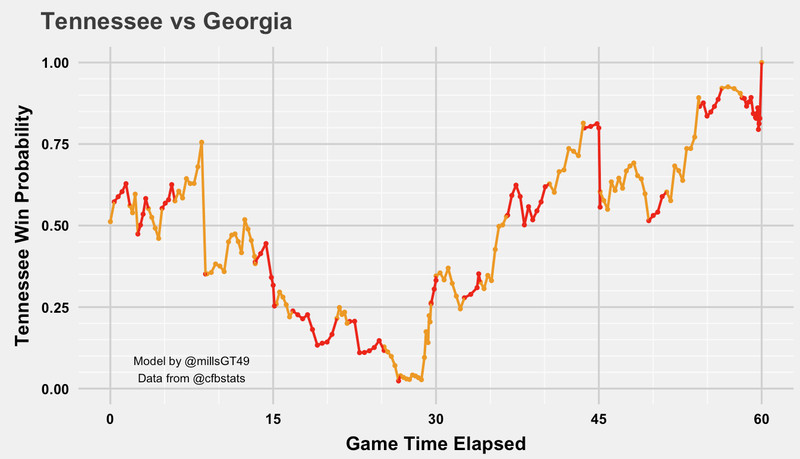 The difference between Georgia’s defensive players and us?

We didn’t have to wait to see the film a couple of days later to be nauseated about the poor tackling.

Give that Dawg a bone.

For this week’s Missouri, Georgia has taken the unusual step of only naming three captains for the game:  John Theus, Reggie Davis and Josh Dawson.  Interestingly, there is no special teams captain.

If that’s a form of message sending, what to make of this?

… Dawson, a senior from Tucker, did not start in the Tennessee game and did [not – sic] record a tackle or any other statistic against the Vols.

It’s the seventh week of the 2015 season, and there are already five head coaching vacancies to fill, including this one.

USC is one of those rare places where literally everything a coach needs to win big is right at his fingertips. Take a rock star coach and hand him the LA recruiting turf and media market, big money, immaculate facilities (still relatively new), celebrity fans and a cool-to-the-kids brand, and he should be able to field a regular national title contender.

I lack confidence in Butts-Mehre being able to pull off a competent hire even in the best of times.  What makes any of you think that McGarity and the people he answers to are ready to go out and get a big time coach in this kind of market?

Again, this isn’t about keeping Mark Richt.  It’s about recognizing this as a likely scenario if Richt goes.

I don’t want to replace Richt because the odds are 80-90% that our first hire to replace him will not be as good as Richt.  There have probably been 150-200 coaches hired and fired at BCS schools since Mark arrived.  UGA has been in the top 10-15 in terms of winning percentage over that time span. He isn’t terrible.  He’s just not good enough to win SEC or National titles on any kind of regular or quasi regular basis.

Those of you stomping your feet and demanding that Georgia find the guy who will deliver your birthright, how long are you prepared to wander in the desert?  Because when it comes to the Georgia Way, patience isn’t just a virtue.  It’s a necessity.

Today, in things that make you say “duh”.

Special teams play… well, to call it disappointing seems a bit mild, but whatever.  Here’s my first suggestion to fix one of the gaping wounds:  quit running back kickoffs if you can take a knee in the end zone.

A quick study of data tells us that there is no need to bring a kickoff out of the endzone under the current rules. #FieldPosition

Of course not.  Accepting a touchback is an automatic 25 yards.  There’s no risk of a fumble.  No problem with a stupid penalty call that results in even worse field position than an anemic return gets you.  Nobody should get hurt on a touchback.

And if there’s one thing you can call Georgia’s kickoff return game right now, it’s anemic.  Georgia is averaging a whopping 14.95 yards per return.  Sure, that includes Douglas fielding a couple of pooch kicks upfield, but nobody back on the goal line is averaging even 20 yards a return.

Somebody on the coaching staff should be telling these kids unless the team faces a desperate situation where the potential reward outweighs the risk, if you field the ball in the end zone, stay there.

Hmmm… I’m sensing the emergence of a theme.  See if you can guess what it is.

“We’ve really got a young, inexperienced defensive football team,” Pruitt said. “The guys are working really hard. We’ve just got to get them to come along a little faster.”

“Everybody played a lot of snaps,” Sanders said. “A lot of young players are playing, and they have to know that in this league you’ve got to go, play as many snaps as you can.”

“We had a lot of miscommunication and just a lot of different things, lack of education, and we just didn’t execute as well as we needed to…”  [Emphasis added.]

As I’ve said before, Mark Richt is engaged in a precarious balancing act of winning now while playing a lot of freshmen because of a talent problem, a lot of which was something of his own making due to poor roster management.  And, yes, he deserves all the blame for that, but, really, what else should we expect at this point after he’s recognized the problem and taken what looks like a direct approach to correcting it?

It’s gonna be a wild ride this season.  The best we can hope for is that the lights come on before it’s too late.

Seth Emerson does his usual level-headed analysis of Saturday’s game here, and there’s one thing in particular he brings up that is worthy of attention.

Something I think looms large that is starting to show: The blocking on the edges also isn’t there, and this is where Georgia misses Chris Conley and Michael Bennett. Yes, Malcolm Mitchell and other receivers will throw a good block, but Conley and Bennett were bigger receivers who did it consistently. Right now Georgia is depending on smaller guys – Mitchell is 6-1, Terry Godwin is 5-10 and Reggie Davis is a skinny 6-foot – to block on the outside.

Another reason for the run struggles: The lead blocking just isn’t quite what it could be. You see several plays where if a defender was blocked at the point of attack the running back could have a few extra yards and potentially get into the secondary. Instead, most of the time it’s Michel going into a mass of bodies, no surprise since the blocking in the box is basically five-on-nine.

I mentioned the first as a potential problem a couple of months ago (although many of you disagreed with me on it then) and it’s been apparent in the two losses.  The second we may not have seen coming so much – let’s face it, last year defenses were loading the box and the line and fullbacks weren’t having the same degree of difficult clearing running room – but it’s there now, too.

Part of the problem may simply be that defenses are taking Georgia’s passing game as even less of a threat than last season.  There’s really only one way to change that, and to date the results there have been spotty at best.  Another part is the offense in the two losses has been asked to hold things together in the face of a tsunami of momentum for the opponent.  It’s tough to find the motivation to run block when the other team is in the midst of a door-blowing scoring run.

If there is a bright side to this, it’s that despite the issue with blocking, Nick Chubb managed to average more than eight yards a carry before he got hurt and Sony Michel is averaging close to seven.  Keith Marshall, who can expect more work going forward, has gained more than five and a half yards with each of his rushes.  There is talent and it’s talent that’s been able to produce.  It’s helped that the problem with blocking has been in getting push; it’s not as if the line is getting knocked on its collective ass.  It’s up to Schottenheimer to design calls that take advantage of what is working so far.  From there, he’s just got to hope for some better traction in the passing game to open things up more for Georgia’s run blocking.

It’s not a hopeless task.  There’s too much talent for that to be the case.  But it won’t be easy, either.

Ole Miss is set to recover from its Tunsilectomy.

The NCAA sets a seven-game suspension for the gifted offensive tackle.  Yeah, there was the usual finding of accepting impermissible benefits, but the reason for the lengthier time period was because “the NCAA determined that Tunsil was not completely forthcoming with initial questioning by NCAA investigators”.  In other words, he lied.

Hope Freeze enjoys the few games Tunsil’s got left to give the program.  This isn’t a kid who’s coming back for his senior year.