Love is a many weekly thing.

Of all the reasons in the world to have the playoff selection committee release results weekly, this is one of them.

Delany: @CFBPlayoff must socialize rankings to public b/c of "other polls out there that are competing for affection and support"

Notice Delany doesn’t say whose affection he’s competing for.  But you know, right?

Honestly, fellas, there are times when you make it really hard for me to care about your sport.

He’s a tribute to his position coach.

Mayock says Aaron Murray might play the position better than anybody in the draft. High praise.

It gets lost in the shuffle sometimes, buried in the criticism thrown his way as the offensive coordinator, but Aaron Murray is a good reminder of how well Mike Bobo does his job as position coach.  I mean, compare the Murray we watched self-destruct against LSU’s defense in the 2011 SECCG with the Murray who throws the game winning touchdown against LSU last season (dial the clip to the 13:15 mark and listen to Danielson’s commentary).

It’s night and day who dictates to whom.

Yes, Aaron is an awfully good quarterback with an impeccable work ethic, but somebody still had to teach him.  Mayock’s comment is as much about the program as it is about the draftee the program produced.

USA Today lays the whole thing out in its majesty here.  Well intentioned, overly complicated, flimsy in places, it comes off as something less than the whole of its parts.

The voting process is as follows:

Each committee member will create a list of the 25 teams he or she believes to be the best in the country, in no particular order. Teams listed by more than three members will remain under consideration.

2. Each member will list the best six teams, in no particular order. The six teams receiving the most votes will comprise the pool for the first seeding ballot.

4. Each member will list the six best remaining teams, in no particular order. The three teams receiving the most votes will be added to the three teams held over to comprise the next seeding ballot.

It starts out looking like our old friend, approval voting.  The first two rounds of the vote aren’t ordered.  (And why two rounds, anyway?)  Then it gets fussily involved – rank six, separate out the top three, rank the next six, lather, rinse, repeat until a top 25 emerges.  That’s a lot of wasted effort for something that you’d think could be more efficiently derived by letting a larger voting pool pick eight or ten top teams and let the order sort itself out… at least that’s what I hope this year’s Mumme Poll will evidence.

As far as recusal goes…

— If a committee member or an immediate family member, e.g., spouse, sibling or child, (a) is compensated by a school, (b) provides professional services for a school, or (c) is on the coaching staff or administrative staff at a school or is a football student-athlete at a school, that member will be recused. Such compensation shall include not only direct employment, but also current paid consulting arrangements, deferred compensation (e.g., contract payments continuing after employment has ended) or other benefits.

— The committee will have the option to add other recusals if special circumstances arise.

— A recused member shall not participate in any votes involving the team from which the individual is recused.

— A recused member is permitted to answer only factual questions about the institution from which the member is recused, but shall not be present during any deliberations regarding that team’s selection or seeding.

… it’s defined in purely personal economic terms and applies to teams and not conferences, which I suspect is by deliberate design.  It fails to address bias, which may either be a vote of confidence in the raised level at which the committee members operate or a recognition that it would have been extremely difficult to come up with a working guideline to neutralize bias.  The solution here, again, would seem to be a larger selection committee voting pool.  With only thirteen voters, recusing people from participating in the seeding pool is going to concentrate the key vote in the hands of a few.  Especially when blocks of voters can lobby to have the seedings revoted.

It’s not so much that the process looks corrupt as it does Rube Goldbergian.  And the more complicated it appears, the less transparent it will seem.

The SEC Network has announced its first four weeks of scheduling.  Here ’tis: 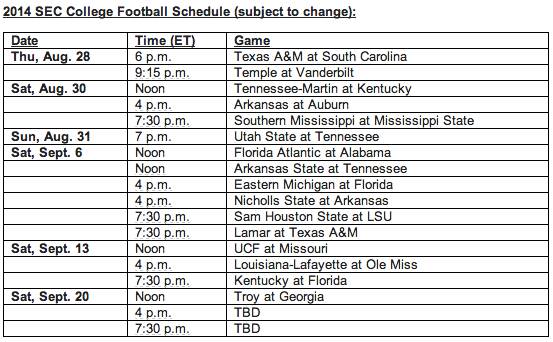 And note that the Troy game in Athens is a nooner.

Another day, another buffet.

Ah, but the crab legs, that’s where I had him.

David Hale thinks it’s time for Jameis Winston to mature and that yesterday’s embarrassment should serve as a wake up call.  With all due respect to David, it’s hard to see the incident serving like that when Winston’s never really been held accountable for much of anything.

In fact, it was just last August when Winston was grilled by reporters about the off-field antics of the previous Heisman winner, Johnny Manziel. Winston joked then that, should he repeat Manziel’s off-field blunders, reporters should smack him in the head with their recorders.

The quote was an early taste of Winston’s gregarious personality and charm that endeared him to the college football world for the next few months. Since allegations of a sexual assault first came to light in November 2013, however, the tone surrounding the star quarterback has changed dramatically.

After an extensive investigation by the Florida state attorney, no charges were brought against Winston for the alleged sexual assault, but the police reports and witness affidavits painted a less-than-favorable picture of the star QB.

During the course of the investigation, reports also surfaced that Winston had been in trouble with police for his role in a BB-gun fight and theft of soda at a local restaurant.

Earlier this month, The New York Times also published a report that another woman had sought counseling after a sexual encounter with Winston. The woman did not suggest a crime had occurred, but she said she was shaken by the experience.

Consequences?  Nothing that registers.

It is important to note that, given all that history, Winston has never been arrested. The latest shoplifting incident, which left Winston suspended from Florida State’s baseball team and will require restitution to the supermarket, as well as community service, is the first time the quarterback has faced any significant punishment for his alleged actions.

The school and the community are enablers.  Does 20 hours of community service and repaying 32 bucks now serve as a shock to the kid’s system when he’s been allowed to dodge responsibility repeatedly?  Color me skeptical.

Chris Low engages in a fun exercise, asking the musical question “Other than [Herschel] Walker, who are those SEC players no longer playing that I’d most like to see play again?”