I think we know what Stacey Osburn will have to say about this.

Judge Wilken skunks the NCAA on all its outstanding O’Bannon motions.

About that “modest increase in ticket pricing”

It’s all Ohio State’s fault, or something.

In speaking with reporters, McGarity referenced high ticket prices at Ohio State that give the Buckeyes a profit of roughly $7 million per game.

“We in turn net approximately $2.25 million every year,” McGarity said. “So there’s a wide, wide gap and I think it dovetails into the market or the accessibility to these non-conference teams (as opponents). It’s going to turn into a bidding war, because if School A can go to Ohio State and have a guarantee of $1.5 million, that makes business sense, because they’re generating $7 million a game. But that race for trying to find opponents is going to increase, and it’s going to be very competitive. Not only do we need it for that standpoint, but costs aren’t going down.”

Now, for the sake of argument, let’s skip past the point that when you toss in Hartman Fund contributions, the revenue gap between what Georgia football (“$23.4 is budgeted to be from the Hartman Fund, $22.5 is budgeted to come from football tickets”) and Ohio State football ($48,761,850.00 as of fiscal year 2011-2) pull in shrinks dramatically.  And never mind that Big Ten schools revenue share gate receipts from football games.  Here’s what I want to know:  if Greg McGarity is so concerned about the rising cost of non-conference games, isn’t that a strong justification for going to a nine-game SEC schedule?

The next time you catch somebody insisting that there isn’t enough money in big time college athletics to pay players, point ’em to this item in Georgia’s 2015 athletic budget:

A video board to be featured on the wall of the multi-purpose turf room at the Butts-Mehre building, mostly for recruiting purposes and various functions and gatherings ($250,000).

A question about the Georgia-Georgia Tech series

This is directed to those of you who advocate discontinuing the Georgia-Georgia Tech series.  Take a look at this chart: 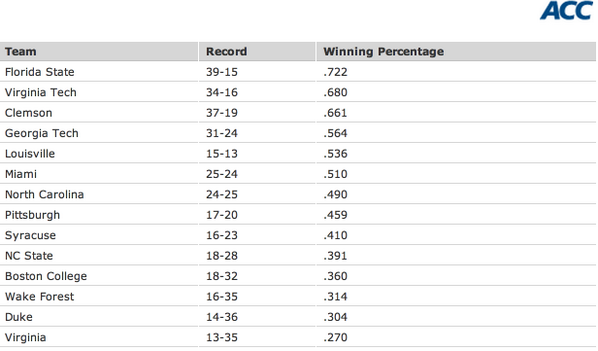 Mark Richt is 5-0 against a major conference opponent that’s 31-19 (62% winning percentage) against all other power conference opposition over the past five seasons.  That record includes Richt’s two worst teams in thirteen seasons, mind you.  As we enter an era when strength of schedule becomes more important than ever, other than to gain a temporary moment of smug satisfaction, why on earth would you want to give that away?

Bonus question for the subset that wants to schedule Georgia State or Georgia Southern instead:  are you out of your damned minds?