Georgia has won its first four SEC games by 25 or more points for the first time in its history. It's also a feat Saban hasn't attained.

You know you’ve been waiting for the next steaming hot take from Mr. Conventional Wisdom.

What We Learned: @AlabamaFTBL vs. @FootballUGA in Atlanta looks inevitable. Of course, after this weekend NOTHING in college football is inevitable.https://t.co/91VFfRCmAF

So many pundits promise consistency.  Tony’s greatness lies in that he actually delivers.

Spencer Hall worries about the effect the 7-0 Bulldogs may have on his psyche:

When Georgia’s gone 7-0 before, it meant SEC titles at least, and in one modern case — the hallowed 1980 season — it meant a national championship. There is no snide joke about inevitably losing to Florida or Alabama here. I’ve been preparing my soul for the real possibility of consistently good Georgia football for several months now. For your own protection, I suggest you do the same.

You know for a Gator fan that’s especially gotta hurt.

Balance, when things are clicking

Jake Fromm is your SEC leader in yards per attempt.

Georgia has three of the conference’s top nine backs in yards per carry.

“Frustrated, but it’s not the end of the world.”

For a guy making more than $4 million a year to, you know, win games and play for big titles, Gus Malzahn sounds remarkably sanguine about blowing a 20-point lead to a team that lost to Troy a couple of weeks ago.

I don’t know what blows me away more this morning, that Georgia is fifth nationally in third-down conversion percentage, or that the Dawgs are converting more than 50% of their third down conversion attempts.  This, with the question marks at wide receiver and offensive line coming into the season, not to mention starting a true freshman quarterback for the last six games.

Those of you who are still down on Jim Chaney, you are welcome to explain your misgivings in the comments section.

The grind, she is getting statistic-y.

This is ESPN analytics, so I don’t know how pornographic you’ll take this as being, but still… 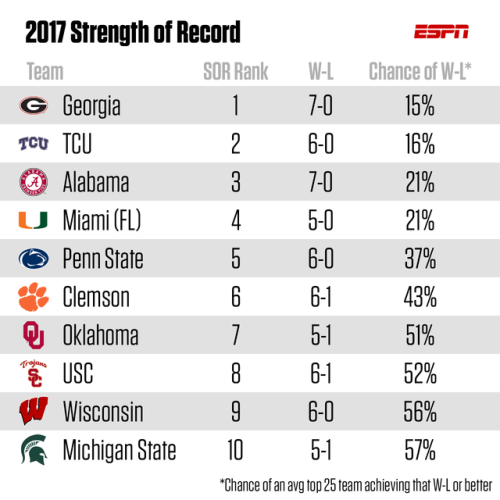 Tennessee, one of the Dawgs’ traditional rivals, was already in a deep hole to take the East.  South Carolina merely shoveled the dirt into the burial plot.  Florida, with its second conference loss in a row, now needs help to win the division even if the Gators prevail at the Cocktail Party in a couple of weeks.  (For the record, I take nothing for granted in the city of Jacksonville.)

That leaves only one team in the East with only one loss.  The Wildcats.

It’s not just the record that has me pointing out UK.  Take a look at the remaining schedule.  Outside of Georgia, there’s not a conference school left that Kentucky won’t have a decent shot of beating, and in Georgia’s case, the ‘Cats will get them at a favorable moment, after the Dawgs have run the Florida-Auburn gauntlet.  (There’s a game with South Carolina tucked in the middle of that, too.)

I admit that, on paper at least, Kentucky hasn’t exactly been that formidable a team.  Sagarin has UK around sixty in his ratings.  On the other hand, you can make an argument that Kentucky is a whisker away from being 6-0 right now, but for a couple of unforced errors against Florida.

In any event, winning the division is measured by an objective standard, not a subjective one.  The team with the most conference wins goes to Atlanta.  Right now, the UGA-UK game is starting to shape up as one where Kentucky would have a puncher’s chance to sneak into that conference title game.

I may not have gone into the season thinking Georgia was a lock to win the East, but it certainly wasn’t a stretch to think the Dawgs would be a divisional favorite.  Picking the Kentucky game as the one for all the divisional marbles, though?  I doubt anybody saw that coming.

Did somebody get the license plate number of that truck?

Sony Michel is not to be taken lightly. pic.twitter.com/1KsYNBoO9O

And Michel is just the lightning portion of his and Chubb’s thunder and lightning act.  Hunh.

Okay, maybe Georgia’s win last night was a trifle sloppy, but it’s hard not to have a warm feeling about most of the results across America yesterday.

First off, four teams in the top ten — Clemson, Washington, Washington State and Auburn — took it on the chin.  No, that doesn’t make Georgia a lock for the playoffs in any way, shape or form, but it does enlarge the margin of error.

On top of that, Florida, Tennessee and Georgia Tech all lost.  (Oh, did I mention that Auburn lost?  Ah, that’s right I did.)

If you’re a Dawg fan, it don’t get much better than 7-0 and all that carnage.  If this is what the football gods being benign looks like, then all I can say is thanks.