Do I have to come right out and say it?

“I hate Alabama. That’s just the way it is…”

I have to admit I’m sorta cool with that.

Filed under Alabama, Because Nothing Sucks Like A Big Orange

If you’re among those worried about whom Jake Fromm will be throwing to with his favorite receiver from last season off to the NFL, maybe you should keep calm, as these two options should carry on.

That is one talented duo at WR in Athens coming back this season pic.twitter.com/2LwakOJFG1

That’s not just SEC, but all FBS programs.  In other words, Jake’s got something to work with.

“They are definitely not losing any football capabilities here.”

Worried about who will be stepping into Davin Bellamy’s and Lorenzo Carter’s shoes?  They’re not.

That’s why they know the 2018 season will offer the chance for more Bulldogs to get their starting turns on the defense. Bellamy’s first pick in the “next Wolfpack up” category would be senior D’Andre Walker.

Bellamy felt Walker also could have started for a lot of SEC teams last year, too.

“He finished last year with like 15.5 tackles for a loss and something like six sacks,” Bellamy said. “He really made some game-changing plays for us in only a short amount of playing time. I’m really looking for him to take the next step.”

But he also had a couple more names in mind. That was sophomore Walter Grant. Grant saw extended action last year for the program as a true freshman member of Georgia’s “Wolfpack” core at OLB.

Walker roomed with Carter last year. Grant roomed with Bellamy. That certainly sounds like those two were being groomed to take over those starting spots in 2018. They were able to learn from a veteran and see what it took to hold down a starting spot.

“He has the length and size to be in that Leonard Floyd and Lorenzo Carter category and has a nose for the football,” Bellamy said.

Bellamy also felt that Grant picked up the playbook faster than any freshman he’s been around. That might have been because he had a pretty good tutor.

“He’s a young bull and I taught him everything I knew and he picked it up pretty fast,” Carter said of Grant. “Playbook. Work habits. He really understands football.”

There was also one more name to add to list of names to watch from spring practice.

“There’s another guy that a lot of people are sleeping on is Robert Beal,” Bellamy said. “He started coming along really well toward the end of the season last year. We started throwing him in there late with some good-on-good reps against the 1s and 2s from the offensive line. He really started to hold his own.”

All Walker seemed to do when he was in was make plays.  And Grant showed phenomenal football sense for a true freshman.  Add Beal and a couple of studs from the ’18 class to them, and I have to say I’m not too worried about the OLBs stepping up just fine.  If only somebody could reassure me in the same way about the ILBs…

Welp, tomorrow is the first day of the defending SEC champs’ 2018 season, and while I expect the quarterback “battle” to suck most of the media oxygen out of the room, my biggest question about the spring is nicely summarized in yesterday’s Bill King column:

As my buddy Joel put it: “My biggest concern can be summed up in four words: Roquan Smith is gone.”

There’s no question that Kirby’s done a great job of building roster depth, but you don’t lose All-American type talent without having to regroup.  If Natrez Patrick can make it back to being a reliable contributor, that would be a huge help, but it’s also something we can’t count on at this early stage.

What’s the area you’re most focused on this spring?

Playing down to their level

Man, of all the folks you’d think you’d never have to advise to act like you’ve been there before… take it away, Alabama AD:

Great win today over UCF for @AlabamaWBB! We're not ready to make it more than it was and schedule a Disney Parade…but we'll definitely take it. #RollTide pic.twitter.com/LyjvFKbmoO

Which immediately allowed for this retort:

Our policy has been to schedule Disney parades when we win New Year’s Day bowl games. We’ve won 2 in the last 5 years. The most recent in 2017 when we were the only undefeated team in America, & National Champions. If y’all wanna have a parade for WNIT wins – more power to ya! https://t.co/pgFLN8mqj9

Filed under Alabama, It's Not Easy Being A Mid-Major

It still blows me away how so many people thought the Pac-12’s hire of Scott as its conference commissioner was something of sheer brilliance.  The reality is that he’s a putz.

The result of the major missteps with the Pac-12 Network is awful payouts to the conference members. While Big Ten and SEC teams are hauling in around $8 million a year from their TV deal, the Pac-12 dished out a paltry $2.5 million to its members in 2017. When the network launched, the schools were expecting between $5 million and $6 million per year. Now that looks like a pipe dream.

Meanwhile, in overall revenue distribution, the conference Scott oversees lags far behind. The Big Ten paid out nearly $35 million per school in 2016 and the SEC dished out $40.5 million per member. The Pac-12 sent out $28.7 million, a number far below expectations. In 2017, the SEC paid out $40.9 million per school, while the Pac-12 is expected to sit right near $29 million.

Oh, and if that wasn’t enough, Scott is the highest-paid conference commissioner, taking home more than $4 million a year. He’s making more yearly than the universities he oversees make off the conference’s television deal.

Though if he’s a putz, I hate to think what that makes the people who hired him.

Just a couple of quick Urnge tidbits to share with you:

Sounds like Phil Fulmer’s master plan is right on track.

Not a bad way to finish

Your memories of the nati0nal championship game, like mine, may include the interior of the offensive line being repeatedly blown up by Alabama’s interior defense.  That’s kind of a shame, because Isaiah Wynn went out, if not in a blaze of glory, at least more than holding his own, as this clip demonstrates.

Andrew Thomas may be a larger human being than Wynn, but he’s still got some big shoes to fill.

Back when I had my stint in college radio, I remember walking into the station one day and having a friend there rush up and put an album in my hands, saying “you gotta hear this!”.

This was the record. 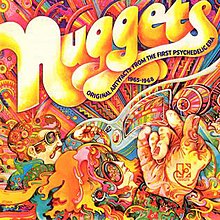 Nuggets: Original Artyfacts from the First Psychedelic Era is a groundbreaking compilation album of American psychedelic and garage rocksingles released in the mid-to-late 1960s. It was assembled by Lenny Kaye, later lead guitarist for the Patti Smith Group, under the supervision of Jac Holzman, founder of Elektra Records. Kaye initially conceived the project as series of approximately eight individual LP installments, each focusing on US geographical regions, but Elektra convinced him that one 2-disc LP would be a more commercially viable format.[3] The resulting double album was released on LP by Elektra in 1972 with liner notes by Kaye that contained one of the first uses of the term “punk rock“. It was reissued with a new cover design by Sire Records in 1976.

Lenny Kaye deserves a place in heaven.  I don’t know how he managed to convince Elektra the world needed this record, or how he was able to get the rights to all the songs.  (Good compilation albums are a bitch to put together because some rights holders can be greedy assholes.)  But he did and, boy, am I grateful.

There are few rock albums I would consider essential, but if you love American sixties rock, you pretty much need to have Nuggets in your collection.  If you don’t, well, I’ll use this week to give you a sampler.  We’ll start with the opener, The Electric Prunes “I Had Too Much To Dream (Last Night)” — and if those aren’t a quintessential garage band name and song title, I don’t know what is.

What the Prunes lacked in charisma, they made up for in fuzz tone.  Rock on, peeps.