Off to the races

Missouri is making plans to offer in-stadium beer sales for the 2019 season.

On Monday, Sterk will formally propose starting alcohol sales when he meets with the school’s Intercollegiate Athletics Committee, a collection of MU faculty, staff, alumni and students. The topic also could come up for discussion at next week’s UM System Board of Curators meeting in Columbia. Should MU approve to start sales this fall, Levy Restaurants — the school’s concessions company —would be responsible for hiring and training workers to comply with SEC regulations for game-day sales. For now, MU would like to start sales at football and men’s and women’s basketball games and probably baseball and softball contests.

I guess that’s what you can get done when you don’t have a Magill Society to flatter.

UPDATE:  Another SEC school checks in.

Filed under I'll Drink To That, SEC Football

My early 2019 power ratings for all 130 college football teams:

According to his Twitter bio, Powers once worked with Phil Steele and his specialty is devising power ratings.  He describes his methodology as follows:

This early set of power ratings takes into consideration the amount of returning production, the number of returning starters and other key factors (turnovers, close wins/losses, recruiting, etc).

The interesting thing to me about his 2019 list isn’t that there are five SEC teams in his top ten.  What’s interesting to me is how his ratings have moved, year-to-year. 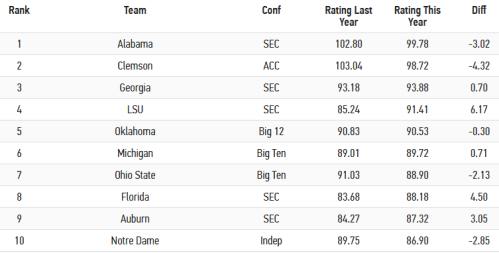 Rome wasn’t built in a day and Georgia catching Alabama for the long haul wasn’t something I expected to occur overnight, no matter how much sleeping giant talk we’ve heard about the program Kirby Smart took over.  Progress, though, seems undeniable.  Georgia has managed to cut the gap between it and the defending national champs essentially in half, as shown by Powers’ numbers, and come close to doing the same with ‘Bama.

Obviously, there’s still work to be done, but it’s nice to see third-party confirmation like this.  I’ll be curious to see if Steele tracks this as well when his preview mag hits the stands in the next couple of weeks.

Know what a DSO is?

I bet Greg McGarity does.

The days of big-time college sports being “amateur” are long gone. The NCAA generates more than $1 billion a year in revenue. Athletic conferences and member schools negotiate multi-year, billion-dollar TV deals as well as lucrative merchandise, apparel and live streaming contracts. Some college coaches earn millions of dollars a year and take home more in pay than their universities’ highest-ranking officers. Meanwhile, the legal efforts of college athletes to be compensated for their labor and for the commercial use of their names, images and likenesses continue without resolution. Yet the “professional” elements of their collegiate experience are undeniable: college athletes at major programs play and train in stadiums, arenas and other facilities that rival those of the major leagues.

By many measures, then, college sports are professional sports.

Still, should athletic departments of public universities be privatized from the rest of their schools? Is that a step too far from the romanticized ideal that collegiate athletics and academics ought to be inseparable?

In some ways this is already occurring in Florida. As detailed by Iliana Limón Romero in the Orlando Sentinel, Florida State University’s athletic department intends to become a so-called “direct support organization” (DSO) under Florida law.

Hmmm.  So what does that get you?

Although they operate for the betterment of their universities, DSOs are partly autonomous from those universities and to some degree function as separate entities. They are not like the university’s English Department or its School of Law or any another academic department school governed by detailed academic procedures and university policies—DSOs are their own corporations, with their own rules. DSO employees work for them, not the associated university. DSOs can thus rely on different systems for payroll and benefits that are used for university employees.

DSOs’ mission statements heed to industry issues and practical applications. They are less engaged in the types of theoretical studies and scholarly pursuits often found at universities and are more about real-world engagements. Further, DSOs can take advantage of public/private partnerships and similar entrepreneurial collaborations that are sometimes difficult to pursue in a public university setting….

DSOs are also beneficiaries of Chapter 768.28 of the Florida Statutes. It is the state law for sovereign immunity. As a general concept, sovereign immunity protects public entities, including state schools, from having to defend against lawsuits. There are a variety of exceptions and limitations to sovereign immunity, but overall it diminishes a public university’s exposure to litigation. This normally means lower legal fees and lower insurance rates for universities. It also means a lessened risk for pretrial discovery, which in the public university context involves the taking of sworn testimony from university officials and sharing of emails, texts and other evidence from those officials with the party that is suing.

All this needs is some timely General Assembly lobbying to make this happen.  I mean, when you’re a legislator trying to pass whatever it takes to bring Georgia that elusive national championship, you gotta do what you gotta do.  And surely we don’t want those Florida peckerwoods getting the jump on our fair state’s premier athletic department!

Now, to make sure Kirby has some free time next year…

UPDATE:  Oops, I guess I should have looked.  It appears the Georgia Code already recognizes direct-support organizations.  Welp, get cracking… don’t want to lose this arms race, amirite?

The story was about Florida State creating a private nonprofit organization to oversee its athletic department, a move that will effectively shield athletic officials at one of Florida’s flagship public universities from having to comply with public records law. Once the transition is complete later this year, Florida State athletics officials — just like their colleagues at Florida and Central Florida, who made similar structural changes years ago — will no longer be required by law to turn over internal financial documents, emails, text messages and other records to inquiring journalists and citizens.

To Petersen and other advocates for government transparency, the announcement prompted concerns Florida State athletics officials are trying to avoid the public scrutiny and oversight that usually comes with working at a public university.

“It’s outrageous,” Petersen said. “It really doesn’t make much sense to me, except that they want to do everything secretly.”

In a phone interview Wednesday, Florida State President John Thrasher said secrecy was not a motivation for the restructuring. Thrasher pledged that Florida State athletics officials will continue to fulfill records requests as if nothing has changed, even after state public records law no longer applies to them.

“The idea has never been to be not transparent. The athletic department’s going to be very transparent,” Thrasher said. “Nothing’s going to change in that regard as long as I’m here. I guarantee it.”

Oh, he guarantees it.  Well, that changes everything.

You know, I was all prepared to post something about karma and that crappy Neyland Stadium turf in the wake of learning that Jeremy Pruitt just permanently lost his fifth (!) offensive lineman due to injuries, but after seeing this quote…

“Melvin is a great young man, and my heart breaks for him and his family,” said the second-year coach. “However, I’m glad that we have an outstanding medical staff that did a great job identifying the problem when Melvin first arrived here. We are always going to do what’s best for our student-athletes here at Tennessee. He is certainly a Vol for Life and will continue to be a big part of our program.”

… I think I’m gonna have to go with observing that Booch’s spirit lives on in Knoxville instead.  I mean, “Vol for Life” is special.  I bet they give you a personalized trash can with that inscribed on it.

The SEC, leaving no stone unturned when it comes to revenue streams:

Per @SmittySBJ, Aflac is close to signing a deal to put its duck logo on the top of medical tents on SEC sidelines for a cool six-figures per school. These didn’t even exist a few years ago! https://t.co/PYocqPA0aO

First off, good for the schools.  Nothing at all wrong with making a buck off your product.  It’s America.

That being said, it’s also another example of how quaint those of you who keep insisting nothing’s really changed in college football over the past quarter century come off sounding.  The reality is that the sport is immersed in commercial exploitation to a degree nobody contemplated years ago.  To pretend that the players are somehow uniquely immune from that is an interesting form of denial.

You know how it always seemed when you’d read those “looking back at the signing class of _____ four years later” that the quality of Georgia’s recruiting diminished in the rear view mirror?

“I wouldn’t want to be the first institution to go through that process.”

Only in the wacky world the NCAA occupies can a school go from being a victim entitled to restitution in the FBI basketball prosecutions to being the subject of NCAA recruiting sanctions.

At least six Division I men’s basketball programs will receive notices of allegations for Level I violations from the NCAA by the summer, stemming from the federal government’s recently completed investigation of the sport, a top NCAA official told CBS Sports.

The remaining four would be rolled out later in the summer in what was described as a wave of NCAA investigations meant to clean up major-college basketball.

“There’s even another group of cases that we’re still working on,” Wilcox said. “The main thing is that we’re up and ready. We’re moving forward and you’ll see consequences.”

Level I violations are considered the most serious by the NCAA. They carry the strongest punishments that can include scholarship reductions, postseason bans and show-cause orders against coaches. According to the NCAA, a notice of allegations is sent after an investigation has closed.

If you think Mr. Wilcox sounds eager to wield the hammer, you’re not wrong.

“Those top coaches that were mentioned in the trials where the information shows what was being said was a violation of NCAA rules, yes. They will be all part of these notices of allegations,” Wilcox said.

The NCAA had held off on investigations, he said, at the request of the government until the trials were concluded.

“So now that’s it over, we’re going to be moving forward with a number of Level I cases that will help people realize that, ‘Yeah, the enforcement staff was in a position to move forward,'” Wilcox said.

These new cases will be subject to new NCAA policies adopted through the recommendations made by the Rice Commission, Wilcox said.

In the immortal words of Judge Roy Bean, “First we have the fair trial, then we hang him”.  It’s just that nobody told the schools who was being tried first.

Filed under Recruiting, The NCAA