In this case, I don’t think the “Double Cross” is a pass pattern.

This promises to get the blogosphere a-twitter this summer.

Honestly, I don’t think anything in that book related to Craig James would shock me.  Unless that’s meant in the Captain Renault sense of the word.

‘Cause being in love with your ass ain’t cheap.

File this under money well spent… so far.

Auburn University says it has spent approximately $170,000 in attorney fees on the Cam Newton case during the past 4 months.

We all want life to be like a Corona commercial sometimes.

If you thought Mark Richt’s management style last season was a little too hands-offish, that’s nothing compared to Rick Neuheisel, who, after having botched a defensive coordinator hire and looking at two open slots on his coaching staff, evidently decided the best thing he could do with his time was to chillax in Cabo.  Sweet! 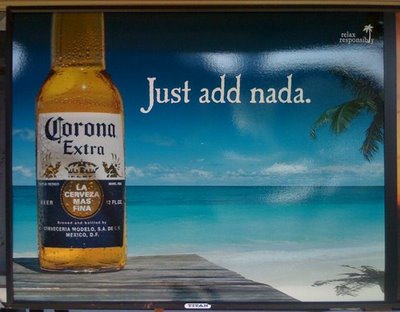 He's down with that.

“It’s a much more complex question than meets the eye.”

Mike Slive says a whole bunch of nothing about oversigning in this Q&A with Chris Low.

On the heels of national signing day, one of the hot topics right now is oversigning, and those in the Big Ten are screaming that the SEC has a huge advantage because many of the SEC teams oversign so many players. Where do you stand on the matter?

MS: It was two years ago that we took the initiative and put in an SEC rule that 28 was the most you could sign [in one class] and understanding that the rest of the country might not do that. The rest of the country followed suit and copied the SEC rule nationally and made it 28. Now, we’ve had a couple of years with the 28, and there are issues that relate to signing day. We’ve actually had an athletic director committee that’s been looking at all this for several months before all of the articles. We expect a recommendation from the committee that will come to our athletic directors this spring, and I fully expect legislation to be considered in Destin [at the SEC meetings] that will address some of the issues that have been raised.

MS: It’s a much more complex question than meets the eye. That’s not to say it isn’t one that needs to be addressed and resolved. Just like we did with the 28 limit, I’m pretty confident that we will take some initiative in Destin to try and deal with some of the issues that have been discussed. It’s complicated when you talk about the 25 you can get in in August and then counting some back and then counting some forward and then the issue of “grayshirting.” You also have more and more prospects enrolling for the spring instead of waiting for the fall. Our athletic directors are trying to take all of those pieces to the puzzle and see if there’s a way in which to address them that’s really fair to the student-athlete and fair to the institution.

Do you agree with Florida president Bernie Machen that “grayshirting” is a morally reprehensible practice?

MS: I think it’s a practice that on its face is one we’re going to address head-on. There’s a question that relates to notice and making sure that everybody knows exactly what’s going on. I think you will find that our ADs and our league will address the issue of “grayshirting.” Bernie has raised it. It’s definitely something that will be a part of whatever recommendations come from our athletic directors.

Honestly, I don’t blame him for yawning about the Big Ten’s complaint about competitive advantage.  But the rest of what’s there is a complete sidestep.  The faux concern about the 25/28-player annual limits is touching, but notice that he says nothing about the real problem, which is screwing kids over to meet the 85-player roster limit.  And if you’re not going to acknowledge a problem, it’s hard to see how you’ll get it fixed.

What a Friend he has in Will.

Reading the tea leaves about the Will Friend hire, it sounds like Mike Bobo was driving the bus.

Offensive coordinator Mike Bobo called the UAB offensive line coach to tell him he was interested in him for the job. “I told him I would be in Athens whenever he needed me,” Friend said. He met with Coach Richt last week and got the job last Friday. UGA announced the hire yesterday…

… On the returning players. “I know a little bit about the guys who’ve been here. …Just because when I left here coach Bobo and I have stayed in constant contact and you kind of watch people play and see game tape.”

Then, there’s this other bit.

“My job is going to be to train the offensive line,” he said. “That’s the No. 1 thing–to train them and teach them to block.”

Is it just me, or does Mark Richt seem to be willing to discuss negative recruiting more openly these days?

Coming off a 6-7 season (Richt’s first losing season in a decade at Georgia), how much negative recruiting did you face?

Richt: “A lot more than any other season I’ve been at Georgia. We came through all the negativity that was out there. Our style of recruiting is to talk about Georgia and hope we’re good enough. It’s how we go about business. We don’t spend time talking about the other teams.

“Everyone is friendly when courting a guy then when it looks like that one guy is leaning one way or the other, now he becomes a bulls-eye. At the start, we tell them, ‘You’re about to get bombarded for every reason why you shouldn’t go to Georgia. If someone is talking about their school, you have to listen. If someone is talking about our school, you have to take it with a grain of salt.’ So when you tell them on the front end that it’s going to happen and it happens, they say ‘Coach told me this.’ And they really don’t really appreciate it.”

It sure didn’t have much impact with this year’s class.  That’s because of Richt’s secret weapon:  the recruits felt sorry for him.

… We started out poorly, 1-4, a lot of other guys might have jumped ship. This gives you an indication of their character. A lot of the guys were sending messages to me of encouragement, saying, ‘Coach, we know everything is going to be fine.’ That was nice.

Hmmm.  Maybe these kids don’t read internet message boards as much as some would have us believe.  After the Colorado game, much of the encouragement Richt was receiving from the online Dawgnation was to pack up and leave town.

There’s a huge smoking crater where our class used to be.

Matt Hinton tells the story of the amazing disappearing act of Junior’s only recruiting class in Knoxville:

In all, of the eight 4/5-star players who committed to Kiffin from December 2008 forward, only two – cornerbacks Eric Gordon and Marsalis Teague – are currently listed on the 2011 roster. When you pull up this page on Rivals.com, it should be slowly engulfed in flames.

Somebody should get Mike Hamilton a t-shirt that says “I hired Lane Kiffin and all I got was this lousy NCAA investigation”.

Speaking of which, Pat Haden sounds like a man who’s willing the play the cards he’s been dealt.

“The reputation and reality of Lane Kiffin are two entirely different things. I understand what his reputation is but the reality that I’ve dealt with is not that reputation.”

We’ll see if the song remains the same should the Laner get slapped with a failure to monitor violation by the NCAA. If that happens, maybe someone could get Haden a t-shirt of his own.