How is “Gator football: it can’t get any worse” as a sales pitch?

We’re about to find out.

The University of Florida has no plans to fire Will Muschamp, even after a monumental loss to Georgia Southern, a source close to the program told the Sentinel on Sunday.

However, significant changes to Muschamp’s coaching staff are expected after Saturday’s season finale against Florida State.

Should be a fun offseason for Boom.  And Foley.

Because they can’t help it.

I’m having a hard time coming to grips with the depths to which Florida has sunk this season after its first loss ever to a 1-AA opponent.  Every time I think I’ve got it figured out, I see something else that makes me start shaking my head again.

You want to blame it on the injuries?  Fine, but Florida wasn’t the only banged up team playing in the Swamp yesterday.

We know Florida's had injuries. Georgia Southern, the team that won there yesterday, had 19 season-ending injuries since preseason camp.

You want to blame it on an inept offense?  Fine, too, except you may not understand how inept that offense is. 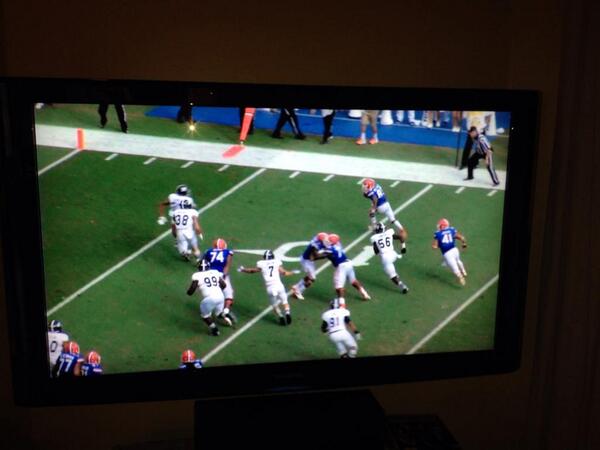 The Gators are so mixed up they’re blocking themselves.  That’s how you lose to a team that doesn’t complete a single pass on the day.  Unbelievable.

Who do we blame for this?

Despite the incredible run of injuries it suffered and the tougher schedule it played, Georgia’s conference scoring in 2013 increased over its 2012 total.

Well, other than one teeny, tiny, little thing, the night went about as well as I could have hoped.

Kentucky was sorely overmatched.  The consensus around me was that North Texas would have handled the Wildcats and Appy State would have given them a game.  I can’t speak to that with certainty, but there’s no doubt that I saw Georgia’s most dominant performance of the season.

Another home season goes in the books, which is always bittersweet, even in a season of disappointments.  Here’s what I saw:

All in all, a very good night.  Except for that one, teeny, tiny, little thing, that is.

And at Stingtalk, there was much rejoicing.

The denizens at everyone’s favorite Georgia Tech message board have greeted the news of Murray’s injury with all the sensitivity you’ve come to expect, combining passive-aggressive wishful thinking with a cocky, yet deluded assurance that people taking offense at their boorishness are simply proving their intellectual inferiority to a bunch still internally distressed over their acne not clearing up during their college years.

Murray’s absence, then, doesn’t concern me.  It does, however, fill me with regret that he won’t be able to pad his stats one last time against a team he’s absolutely owned.  Here are his passer ratings against Tech:

So, yeah, that’s a shame, but otherwise I’ll take my chances.  Oh, and in case you haven’t noticed, Hate Week has officially commenced.  FIAR,B!

When orange turns to gray

Amidst the chaos and craziness that’s characterized the SEC East in 2013, I just wanted to take a moment to say thanks, Tennessee, you’ve been a rock.

Learning experience, for the win

I couldn’t help but chuckle reading this:

Safety Josh Harvey-Clemons, who tipped that game-winning touchdown pass against Auburn, had six tackles and a forced fumble and two fumble recoveries.
“I asked him if he learned anything, he said, `Yes,” Richt said of their talk during the week. “I said `What was it? He said ‘Bat the ball down.’

Woe be unto the next football heaved in desperation against the Georgia defense. 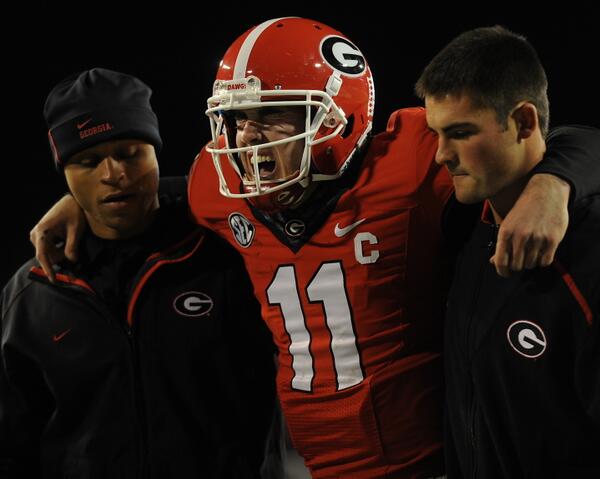 In retrospect, maybe we should have seen it coming.

It’s not like the 2013 season hasn’t already been a cruel bitch on the injury front.  And stuff like this was just inviting the football gods to intervene.

Still, something seems extraordinarily wrong about timing what may be a college career-ending injury on senior night.

But then, in the second quarter of that game, he suffered a left knee injury, after which the UGA medical staff sent him to St. Mary’s Hospital for an MRI. Though the results of that test are pending, it would seem Murray’s shot at playing another game as a Bulldog now appears to be serious doubt.

“He got hurt on the [28-yard] run,” Bobo said. “He said he was fine and wanted to go. I tried to put Hutson [Mason] in, basically [Murray] wouldn’t let me. He said I’m fine, I’m playing. I said I need to see you moving around out there and he moved around pretty good.”

Handed a comfy 28-10 lead, backup quarterback Hutson Mason filled in for Murray and performed admirably, going 13-for-19 as a passer for 189 yards and a touchdown.

But even Mason admitted that his feelings on the entire situation were difficult to pinpoint: his happiness at the chance to play had been inevitably bogged down by the sadness of seeing a senior go down on senior night.

“It’s like a fairy-tale gone wrong for Murray,” Mason said. “You hate for something to end like that on senior night at home at the end of the season. You know, he’s about to start training for the draft. It’s very tough because I know how hard he works. I’ll call him, see how he’s doing. Right now I’m just waiting to hear what the injury is, will I be playing next week.”

Indeed, the sight of the team’s emotional leader – its Cal Ripken-esque worker at the quarterback position – painfully wincing all the way way into the locker was an unsettling sight for those present at Sanford Stadium. The exit cast an undeniable shadow on an otherwise joyful night for the UGA football team that became difficult for even head coach Mark Richt to shake off.

“It’s just sickening. I really had a hard time enjoying the rest of the game,” Richt said. “It just was hard to have a lot of fun. I’m glad we won and I’m glad we played the way we did but it’s just a crummy feeling right now when you think about what Aaron’s going through.”

I suppose it could have been crueler.  Murray did get his fourth 3,000 passing yardage season before he was lost for the night.  And Mason certainly stepped in and played credibly in relief.  But you can’t help but feel that Aaron Murray’s deserved better than what this season’s doled out to him.

Georgia QB Aaron Murray will have surgery to repair an ACL injury on Tuesday, his mother posted on social media.

Hope this doesn’t negatively impact his pro chances much.  He’s a tough kid who’s overcome serious injury before, so he’s got that going for him.