Name that caption, give me a second here, Corch, edition

Penny for your thoughts, Mark. 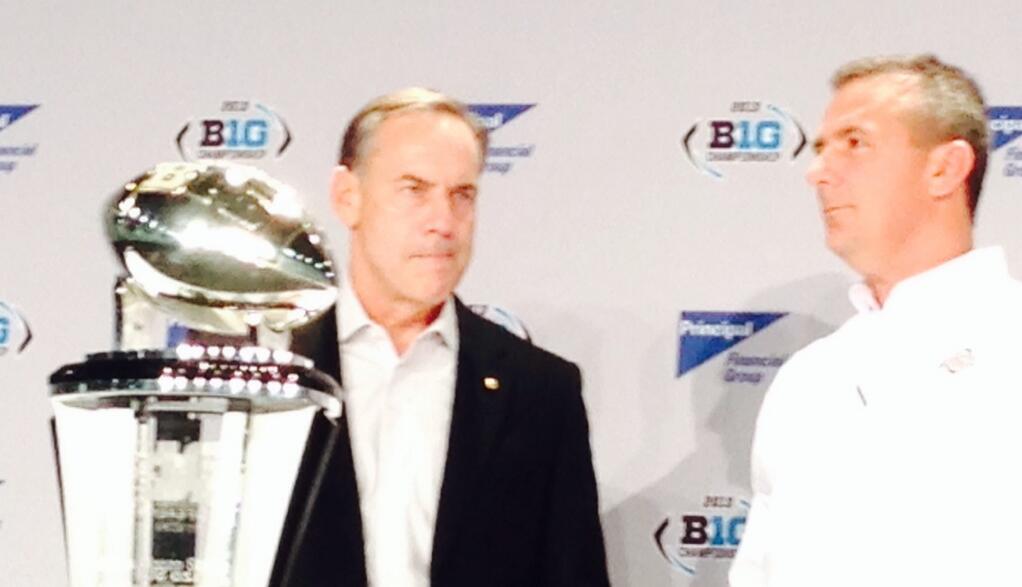 Help a head coach out, fellas.

Is the BCS a victim of its own success?

In a very good piece about the national title format that’s about to bite the dust, Roy Kramer offers something of an early obituary.

Kramer can’t help but wonder: If Oklahoma State had not been upset by Iowa State in 2011 to help create an All-SEC championship game, would the BCS still be alive?

“Deep down,” Kramer said, “I always thought the more logical way would be to take the three highest-rated conference champions and a wild card.”

That actually makes more sense to me than the selection committee does, but I suppose the new format has the virtue of giving the big conference commissioners more control over the selection process.

As for Kramer’s question, I think all the absence of a rematch would have accomplished would have been to postpone the inevitable.  Between the greed and the freakout over the recent decline in viewership, the jump to a four-team playoff was coming no matter what Oklahoma State did.

Butch Jones once said this about Alabama:  “The one thing they can say about their program is it is what we are building here at Tennessee.”

When it comes to recruiting, it’s starting to look like Butch is a chip off the old block.  You may not have noticed, but Tennessee is well on its way to a monster-sized recruiting class, well over the scholarship limit.  How can Jones do that?  Well, much of that will come down to the traditional way more aggressive programs have gone about their oversigning business:  some combination of countbacks to the 2013 class, grayshirting, weeding out some kids on the current 85-man roster and pushing some current commits to the side to take higher rated ones.  It’s a frothy mixture that no doubt will be tolerated by the Vol faithful, but it’s nothing new.

What is new is this.

As Tennessee’s list of verbal commitments continues to grow (it should be up to 34 if lineman Charles Mosley commits on Friday as expected), the Vols are contending with two limits.

There’s no loophole on NCAA scholarship limits. Teams can have only 85 total scholarship players, of whom no more than 25 can be “initial counters” in any given year. (There are some strategies to minimize the impact of the NCAA limits, which I discussed here. More on that in a second).

But is it possible that Tennessee’s staff has stumbled upon a loophole that would effectively allow the Vols to “over-sign” in a way that was common a few years ago but has largely been eliminated because of new rules?

Take a look at the text of the SEC rule limiting signees that went into effect Aug. 1, 2011 (emphasis added):

13.9.1 Letter of Intent – Limitation. Each SEC member institution is limited to signing 25 football prospective student-athletes to a National Letter of Intent, Conference financial aid agreement and/or institutional offer of athletics financial aid from December 1 through May 31st of each year. [Adopted 5/29/09; effective immediately; revised 6/3/11; effective August 1, 2011]

(Here’s a .pdf link if you want to peruse the SEC rules yourself.)

The dates are critical, because the SEC bylaw collides with a new NCAA rules interpretation that impacted this recruiting cycle. Academically eligible student-athletes who plan to enroll early (in January) are now allowed to sign aid agreements with universities as early as Aug. 1.

Tennessee had a flood of players sign aid agreements last month — perhaps a half-dozen players or more. Why is this significant? By the letter of the law, those players wouldn’t count against the SEC’s signing limit. They’re freebies, if you will.

I’m not exactly sure I’d call that a freebie, or even a loophole.  It’s more like buying something on credit – at some time you’ve still got to pay the bill, so to speak.  It’s a semi-loophole, at best.

The possible loophole I described is for the former; there is no loophole for the latter.

At the end of the day, the Vols — like any other team — can give no more than 25 initial counters in any year and have no more than 85 scholarship players overall.

Under the hypothetical theory I floated in the story, the Vols could sign 35 players, but they would still have to cross the scholarship hurdle.

In the end, Jones will have to get his roster numbers down to the same level that every other program does.  It’s the process of getting there that’s going to be revealing.  As Woodbury puts it, “Signees are a January/February issue. Scholarships are a May/June/July issue.”  In other words, get ’em in the door and let God sort out the rest.  At least the kids who signed financial aid agreements won’t be coming out of pocket.

The other thing that will be worth watching is as Jones’ strategy comes more into focus is the reaction from other coaches.  Do they scream or do they copy?  Hey, it’s the SEC, who am I kidding?  They’ll do both.

Georgia’s 2013 yards per play story leaves me more confused than ever.

Year2’s observation that Georgia had a higher yards per play average than its opponents in the two losses to Auburn and Missouri got me wondering how that stat looked for the entire season, so off I went to Marty’s site to get the answer.

So Georgia lost three games this season in which it was more efficient gaining yardage than the opponent.  I get Missouri – a minus-4 turnover margin against a good team is awfully hard to overcome – and I sort of get Auburn, but what in the world explains Clemson?  Yes, the Dawgs were minus-1 in turnover margin, and, yes, they had one drive that resulted in no points when the field goal attempt was botched, but, still, that net ypp figure is well above the season average.  And the Tigers only ran six more plays on the night than Georgia did.

On the other hand, Georgia was 2-1 in games when it was in the red on ypp, and could have won the Vanderbilt game with a break (or, more accurately, without Vandy getting more than its share of breaks from the officiating crew).

Anyway, there’s more to consider here to try to explain where the season went south.  Missouri, again, is the obvious one when turnover margin hurt, but if you look at the rest of the season, Georgia never had another game when the turnover margin was greater than minus-1.  That no doubt leads to a discussion about the special teams, but that’s a subject that’s worth a post of its own.

Or maybe the lesson is that it’s been a weird year and it’s going to be a futile effort to try to make sense of it.  We’ll see.