Today, in one thing leads to another

The news that the Gusmeister thinks his punting game needs a little retooling reminded me of this development from June:

Fountain’s wife posted the news on Facebook and Fountain’s Twitter handle was changed to show he has joined the Bulldog program.

Although it’s unclear what position Fountain will hold with Georgia, he brings a wealth of experience coaching having served as the Tigers’ special teams coordinator and tight ends coach from 2013-2016 after spending the previous four seasons (2009-2012) as Auburn’s player personnel director.

He left the Auburn program on February 7 after his contract was not renewed. He was earning $325,000 in a contract that expired today.

At Auburn, Fountain coached some of the finest specialists in Auburn history, including three-time Ray Guy Award semifinalist punter Steven Clark, placekicker Cody Parkey, who ranked second in the SEC in PATs made (66), and kicker/punter Daniel Carlson, a Lou Groza Award finalist as a sophomore who has already set five AU records.

Per the NCAA, here are the current rankings of the two programs in net punting:

Last season, Auburn was 21st and Georgia was 112th.  Probably a coincidence, though.

About the LSU – Mississippi State game

Before the season’s start — hell, before last weekend — I wasn’t expecting LSU-MSU to have a big impact on shaping the 2017 SEC season.  Instead, the decisive margin of victory has led to Orgeron’s coaching (and his ballyhooed coordinators, for that matter) coming into question again and Mississippi State being hailed as a potential power.

For obvious reasons, I decided to give the replay a watch.

The first thing that jumped out at me is how undisciplined LSU looked.  Dumb penalties (two for targeting on the quarterback long after the pass had been thrown), guys out of position all night, effort that tailed off as the game wore on are all things I’ve not been used to seeing out of a LSU team.  Miles may have run boring offenses, but I don’t recall seeing that level of sloppiness out of his teams, at least not very often.  (LSU during his run was 11-1 against Mississippi State.)

Maybe it wasn’t a single moment but a slow, tedious accumulation of them. Most obviously there were the penalties: Nine of them, for 112 yards, and more consequential in the moment than in the box score. The offense had a long touchdown pass negated by a penalty on the first series and a second score wiped off the board later in the first half. The defense needlessly extended a Mississippi State drive in the third quarter, on a roughing-the-passer penalty that turned an apparent three-and-out into an MSU field goal. Minutes later, another LSU defender was flagged and ejected for targeting, jumpstarting a drive that ended with an MSU touchdown.

Beyond the flags there was all-purpose dysfunction: Missed assignments, dropped passes, lethargic coverage, a critical third-down throw that bounced off the face of an open receiver. A full third of LSU’s total offense, including the vast majority of its passing yards, came on two late, futile drives in the fourth quarter that yielded zero points.

The penalty that wiped out the early touchdown was a bad call that normally would lead to hypothetical thinking about how that might have changed the game, but based on the level of play LSU brought, I’m not sure it would have made much of a difference.  The Tigers looked like a team that thought it would beat a lesser SEC opponent based on talent alone, only to find it had no way to answer when reality intruded.

The big question left unanswered for LSU is whether that game was a one-off, or the harbinger of a longer season than Tiger fans anticipated.  There’s plenty of talent, to be sure, which makes you think LSU’s still good for eight wins, but does Orgeron strike you as the kind of guy who can right the ship?

That all being said, it’s wise not to minimize the MSU side of the equation.  Dan Mullen had his team ready to go.  Read the first two points Bill Connelly raised in his post-game analysis and it’s pretty obvious that the Bulldogs were ready for what LSU threw at them; the meltdown on the Tigers’ side is simply what made the margin of victory so large.

So Mississippi State rolls into Athens, its players full of confidence in themselves and their coach’s game plan.  What should we take away from their rout of LSU?

Let me know if you have anything to add.

In case you were wondering about a quarterback controversy…

Jacob Eason returned to practice and made somebody smile.

A happy Jim Chaney watching the return of his other Five-star QB, Jacob Eason pic.twitter.com/C1BNLvEi5I

Meanwhile, Kirby had something to say about Georgia’s starter for the past two games:

… Smart said he has been pleased for the most part with what he has seen from the true freshman to start his career.

“(Fromm’s) got some areas he’s got to improve in,” Smart said. “He’s making better decisions more consistently, which for us, the quarterback position is a decision-making position. We’re not asking the guy to go out there and scramble around and make runs. We have to get him to make good decisions. As long as he does that, we can play winning football. He’s improved in that area, but has some growth to go.”

They’ve been careful not to ask Fromm to do too much and within those parameters he’s largely delivered.  He’s done a helluva job, in other words, for a true freshman quarterback. But he’s made mistakes; fortunately for him and the team, very few of those have come back to hurt.  He’s also not as fluent in the playbook as is Eason.  That’s not a knock, but an acknowledgement of the reality that Eason has a year in the system over Fromm.

Bottom line:  as long as the coaches see value in Eason’s greater familiarity with the playbook, there is no controversy.  From my selfish standpoint, I’m just glad there’s real depth at the position for the first time in a long while.

Down and out in Gainesville, Florida

The credit card case that’s surrounded a number of Gator football players appears to have legs.

The nine University of Florida football players who have been suspended indefinitely by the school for misuse of school funds, are also under investigation for credit card fraud, by two separate police departments in the Gainesville area, relating to an additional credit card fraud allegation.

Jordan Smith, a freshman defensive end, was suspended from all team activates after a report from The Read Optional that Smith had used stolen credit card information to pay rent at an apartment complex — around $1,000 dollars.

The credit card company blocked the charge, leading to an investigation by the Gainesville Police Department. Only one other player was initially connected to the Smith case — a separate case from the student aid fraud investigation (though the second player was involved in both).

Now, The Read Optional understands that several players have been linked to both cases.

The nine University of Florida Football players who are facing allegations of having misused school funds, could be arrested as early as the end of this week, sources have told The Read Optional.

Antonio Callaway, Jordan Smith, and one other player are likely to be arrested on charges of felony grand theft, with the possibility of further misdemeanour charges being tagged on, according to a lawyer representing one of the players. It’s anticipated that the other six players will also be arrested, but only three players have hired legal counsel thus far.

Man, has Antonio gone back to the Huntley Johnson well again?  If so, at least he hasn’t been high enough to lose that number.

Name that caption, hallowed be thy name edition

An alert reader discovered a portrait of a Young Coach As Religious Figure at World Famous in Athens.  Thought I’d share.

“Saint Kirby”?  Man, that Notre Dame win must have been bigger than I thought.

“So what is the Saban effect?”

“… You’re starting to hear that phrase more and more around the SEC with Alabama winning four of the last eight national championships under Nick Saban and going 45-5 in its last 50 games against SEC foes. Maybe the best explanation for what it means is simply this: Since Saban arrived at Alabama in 2007, the other 11 schools that were in the SEC at the time have had 34 different head coaches, including at least three different coaches at eight of the 11 schools.”

Whether Saban is the greatest coach in SEC history is a subject for debate, but I don’t think there’s any argument about whether he’s been the most influential on the course taken by other conference programs.  When you consider that none of the deck shuffling has had the slightest impact on Alabama, the results are both sad and amazing.  You’d figure that with all the resources available around the SEC, some school would have emerged and remained a consistent rival over the course of a decade, but not so far.

Really, if you need a total reminder of why we feel the way we do about Florida and Tennessee…

Filed under Because Nothing Sucks Like A Big Orange, Gators, Gators...

Here’s something you don’t see every season.

My first thought on seeing this was wait, wut? 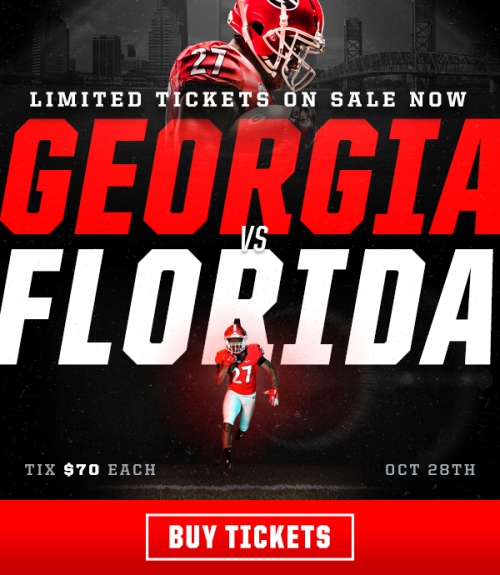 Canary in the coal mine, or is everyone just out of money after Notre Dame?