Name that caption, a tradition unlike any other edition

Some things never change, fortunately.  Have at it in the comments.

An Ohio State trustee resigns over the slap on the wrist Corch received.

He said he was the “lone voice” of dissent in advocating for a harsher punishment, but declined to specify what he proposed or to speak in great detail about the closed-door negotiations, saying he wanted to respect the confidential words of board members.

“Most people were concerned about whether it was a several-game suspension or not,” he said.

“To me,” he added, “there was something altogether wrong about reducing it to a couple of games.”

Sadly, not a bit of that is surprising.  At least there’s one decent human being in Columbus.

The bird is the word.

For those of you planning on making the second week of the season trek to beautiful Williams-Brice Stadium, I have some very disappointing news.

You won’t see this in the flesh, so to speak. 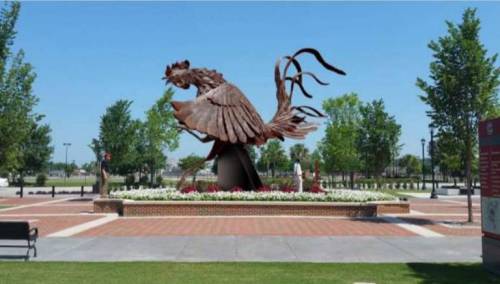 Evidently, South Carolina will serve no gamecock before its time.

A giant, million-dollar fighting Gamecock statue planned for a plaza outside Williams-Brice Stadium won’t be installed in time for the 2018 football season.

The 15- to 18-foot-tall bird remains on hold because of engineering challenges stemming from its size and shape, University of South Carolina spokesman Jeff Stensland said.

USC had hoped to have the $995,000 bronze statue, paid for with private gifts, in place at Springs-Brooks Plaza before the 2017 season, then pushed that goal back to fall 2018.

Ultimately, Stensland said, the school favors a slower approach over rushing the statue’s installation and needing to make repairs later.

Take all the time you need, fellas.  You can’t rush inspiration.

A plague on both their houses

I’m more than a little conflicted over this news.

Michigan State has received a letter from the NCAA stating no violations have been found in the Larry Nassar sexual assault scandal or in a secondary investigation into football and basketball's handling of allegations against student athletes.

On the other hand, at least I’m spared the sight of Mark Emmert ripping up the NCAA manual to make a personal point like he did with Penn State — a point that, by the way, was essentially neutered subsequently.

Filed under Crime and Punishment, The NCAA

“It is just the way we do business.”

The average count of tickets scanned at home games—the number of fans who actually show up—is about 71% of the attendance you see in a box score, according to data from the 2017 season collected by The Wall Street Journal. In the Mid-American Conference, with less-prominent programs like Central Michigan and Toledo, teams’ scanned attendance numbers were 45% of announced attendance.

Even teams in the nation’s five richest conferences routinely record thousands fewer people passing through stadium gates than they report publicly. The no-shows reflect the challenge of filling large venues when nearly every game is on TV, and they threaten a key revenue source for college athletic departments.

“Attendance drives recruiting, attendance drives donations, merchandise sales,” said Rob Sine, who until earlier this year was president of IMG Learfield Ticket Solutions, which works with dozens of colleges. If fans don’t use their tickets, he added, “they’re more likely to not come back.”

Yeah, well, is anybody really surprised there’s usually a gap between reported attendance and actual butts in the seats?

Can’t lose what you never had.

If there’s no depth chart, nobody can accuse you of losing your starter’s role.

The least interesting advertising campaign in the world

Between this and this…

… it appears Dos Equis is going all in on using former college football coaches to hawk its wares.  Bold strategy, Cotton.

Filed under It's Just Bidness, The Evil Genius, Wit And Wisdom From The Hat

“The market just continues to go up.”

Greg Sankey’s bland assurances otherwise notwithstanding, let me introduce to the eventual reason the SEC goes to a nine-game conference schedule.

College football’s version of the gig economy gets rolling Thursday, as teams across the country begin the annual ritual of playing one-time, non-conference games in exchange for huge payouts.

This season, well over $175 million will change hands just for teams getting on the field for these so-called “guarantee” games, according to an analysis of more than 275 contracts for matchups involving teams in the NCAA’s top-level Bowl Subdivision.

The greatest payout this season is the $2 million Colorado State is getting from Florida for a game Sept. 15 that the schools created as part of package under which coach Jim McElwain fulfilled the $7.5 million buyout he owed for leaving the Rams to join the Gators after the 2014 season.

Boy, that turned out to be money well spent.

The trend, as the header quote from Iowa AD Gary Barta indicates, is upwards.  At some point, you’d have to think the conferences are going to realize the math stops adding up.

What do you figure is the number of times Georgia’s coaches have invoked Nicholls’ name in practice this week?

Spare me the Week 0 crapola.  Tonight’s twelve-game slate, including a ranked team and a P5 conference matchup, is 2018’s real beginning.  So let’s get in the mood early.