Saying this sucks doesn’t do it justice.

Needless to say, it’s not hard to figure what the subject of tomorrow’s MPC will be.

Well, now.  This is an interesting development.

LSU will require all Tiger Stadium guests 12 years of age and older to provide proof of vaccination or a negative COVID-19 PCR test taken within 72 hours prior to entry.

Who follows?  And which governors/attorneys general try to block it?

Reminder to all #Vols, we banned vaccine passports in TN so you won’t have to worry about being turned away if you don’t have “your papers”, when going to watch @Vol_Football at Neyland. https://t.co/vmxfbySwQM

I guess he thinks he’s doing them a favor.  By November, Vol fans may prefer an excuse not to watch that team play football.

Filed under Political Wankery, SEC Football, The Body Is A Temple

The schedules, they aren’t strong. 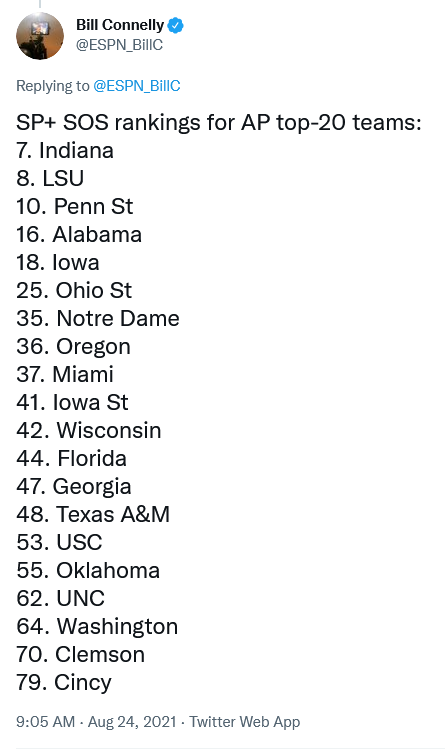 Jeff Schultz’ tribute/love letter to Uga ($$) is well worth your time.

… There used to be a couple of steps, not a ramp, from the doggy door to the yard, but Charles Seiler didn’t realize when he built the house 10 years ago — literally designing it around the dog’s quarters — that stairs and English bulldogs can be a dangerous mix.

“Tore his ACL the first year we had him,” he said.

“It’s a live-and-learn thing. I didn’t realize the steps were going to be a problem,” Charles said. “Poor guy blew out his ACL. He hadn’t even done a game yet. But think about it: The front legs of a bulldog are like tanks. The back ones are just designed to keep his balls from dragging. As they cut and turn and do all that, that bag leg just swings around like a chicken wing.”

Speaking of wings, here’s what’s waiting in them:

“Que,” or Uga X, is 8 years old. It’s near retirement time. But he has been resting for a year and a half, and there’s no reason to make a change now. There’s a depth chart at the breeders. “We always keep a couple of spares,” Charles said. The two on deck: “Sony” and “Nick.”

An Alliance, if you can keep it

The ACC, Big Ten and Pac-12 are set to formally announce an alliance, which pending final approvals could come as early as Tuesday, sources told Yahoo Sports. The Athletic first reported the possibility of an announcement this week.

The Alliance will center on a shared vision for the future governance of college athletics. For now, the Alliance will mean the three leagues can, among other things, form a voting block that will blunt the growing influence of an expanded SEC. It also allows three leagues that consider themselves like-minded to gain voting power on issues as the NCAA’s influence diminishes.

Can you feel the excitement?

On the scheduling front, the idea is that each football team in the three conferences would play one opponent from each of the other two leagues on an annual basis.  Sounds great, until you get into the details.  The Big Ten and Pac-12 would evidently reduce their conference schedules from nine to eight in order to accommodate this.  (The ACC is already at eight.) Notre Dame would count as an ACC team for this purpose.  Even taking all of that into account, it seems like a bunch of guaranteed games would need to be bought out to make the numbers work.  That ain’t gonna happen, so shrinking conference schedules is really the only way in the short term to open up inventory for the Alliance.

A bit more info on the Alliance, per sources, set to be announced today at 2 ET: There will be no widespread CFB scheduling principles outlined yet. Too many contracts in place and uncertainty about potential expanded CFP model. Individual leagues could still make adjustments.

Ah, but the spite!

Four ACC teams have annual games with in-state SEC rivals — Clemson-South Carolina, Georgia Tech-Georgia, Florida State-Florida and Louisville-Kentucky. Those games would continue, but there would be a decided lack of available non-conference dates for other SEC teams seeking major opponents.

Somehow, I don’t think Greg Sankey is losing any sleep over that possibility.  As I’ve said before, I’ll wait to see which Alliance school is the first to turn down a $5 million pay day to face ‘Bama in a neutral site opener.  Besides, if the SEC needs more big games, it can always increase the conference schedule; that’s what adding Oklahoma and Texas gives you.

What’s striking to me here is while the Alliance purports to be wary of ESPN’s influence, it’s adopting the exact approach Mickey already embraced that’s likely to diminish traditional passions for college football.  Dropping a conference game so that Oregon State can face Georgia Tech is the kind of swapping regionalism for national appeal that ESPN has openly pushed since the CFP came into existence.  Sure, there’s a shiny toy aspect to it that will drum up appeal in the short run, but it won’t take long for the viewing public to look for newer, shinier toys.

And that’s the thing.  If you’re hungry for a national appeal for college football, the NFL is already there for you and will likely do a better job of it.

The irony here is that the SEC, whether it’s forced into it by the other three P5s or willingly accepts it, is looking like it will be the last regional holdout.  My bet is that five to ten years from now, the Alliance is going to be comparing broadcast ratings between them and the SEC and wondering what went wrong.

As far as the rest goes, well, if the Alliance is that hung up about ESPN that they’re willing to forego playoff expansion for another few years, more power to them.  It’s not as if the SEC is going to be shut out.  And such a power play isn’t likely to win the three of them many friends between the G5 and Notre Dame.

You’ll notice I didn’t mention the Big 12 there.  That’s because the one thing it appears the Alliance will accomplish in the short run is to kill the Big 12 off for good.  The only question is how long Bowlsby’s conference clings to OU and UT to stave off complete collapse before 2025.  Enjoy it while it lasts, fellas.

“Schools within the three conferences believe they are like-minded, that they want to continue to prioritize broad-based sports offerings and that the academic profile of their institutions matters — as does graduating athletes.”

When they say it isn’t about the money…

All aboard the Dawg train

This clip is worth watching, if only to hear Aaron Murray say, “but you’ve got a quarterback, finally, in Athens”.  Wonder how long that “finally” covers, LOL.

No. 5 Georgia takes on No. 3 Clemson to start the season. The crew make their picks! @KevinCarter_93 – Georgia @aaronmurray11 – Georgia @JonesN4mo – Georgia pic.twitter.com/VFDCVkOmPN

Just haggling over the fee

This would be funny if it weren’t so inevitable.

In January 2019, in front of hundreds of college sports administrators and executives at the NCAA’s annual convention in Orlando, Mark Emmert made a prediction about the impact of sports betting on the college athletics world.

It will “threaten the integrity of college sports,” he told the crowd before him.

In the latest such evidence, the Fiesta Bowl is partnering with Caesars Entertainment, the Nevada-based gambling company, in what is believed to be the first sports betting and fantasy gaming alliance between a college football bowl game and a gambling property.

In today’s college athletics, the only thing with a better winning record than Nick Saban is money.

Filed under Bet On It

So, any hope of a Georgia mention in Brandon Marcello’s piece about the true freshmen looking in preseason camps like they’ll be real contributors this season?

Why, yes, thanks for asking.

Georgia needs all the good news it can get at receiver, where three options have been sidelined due to injuries.

Tight end Arik Gilbert, the 5-star transfer from LSU, and backup Darnell Washington are out (for now); and receivers Kearis Jackson, Jermaine Burton and Dominick Blaylock did not participate in the first scrimmage of preseason camp. All of this news comes in the wake of losing top-tier receiver George Pickens in the offseason due to an ACL surgery.

So, who will step up as the season opener against Clemson quickly approaches? Turns out 3-star freshman Adonai Mitchell continues to impress after an impressive spring in which he caught a team-high seven passes for 105 yards in the spring game.

“Coaches and teammates have mentioned his explosiveness and raw potential at the position and he has gotten a ton of reps with the Bulldogs being banged up at wide receiver,” says Georgia insider Jake Rowe. “He impressed in the first preseason scrimmage with a couple of acrobatic grabs and it’s looking more and more like he’ll have a substantial role in UGA’s 2021 offense.”

I keep telling myself it’s realistic to expect Mitchell to be the latest in a long line of G-Day wonders who do little once the season kicks off, but I have to admit the buzz around him has been sustained longer than I expected.  Maybe he’s about to prove to be the exception to the rule.  Lord knows his timing couldn’t be better.

Hit ’em in the pocketbook.

The SEC has yet to finalize its 2021 COVID-19 game cancellation policy, but sources have confirmed to The Athletic that league officials are discussing a potential financial penalty that could be applied along with forcing a team to forfeit if it does not have the minimum number of players available.

Essentially, if canceled games cost the league television money, then schools whose teams had to forfeit would receive less from the conference’s revenue-sharing agreement than schools that did not have to forfeit games. The idea behind this is to avoid penalizing schools that had their teams ready to play.

It’s one thing for Vandy to bail on a game in which it was going to get its ass kicked, minus any real consequences.  It’s a whole other thing when the conference starts withholding checks, mofo.

TFW you don’t care if you win the press conference

Is it just me, or does Tater Tot seem to have lost a few miles off his fastball?

The full quote from Terry Bowden on why ULM still hasn’t released a roster. pic.twitter.com/CHfmnpU9Bt