“You worry about that, but our fans wanted to go to New Orleans.”

Georgia sold out its 15,500 ticket allotment for the Sugar Bowl against Texas last week.

Our fan base is the bomb.

Man, this is borderline amoral.

Former Maryland head coach D.J. Durkin, fired in October after a lengthy investigation into the death of one of his players, has resurfaced at Alabama.

In his first foray back into football since his October firing, Durkin has been helping Alabama this past week in a consultant-like capacity, sources told AL.com. It’s unclear at this point if Durkin could have a long-term role on Nick Saban’s Alabama staff though, according to sources.

You know Durkin wants long-term.  Working for Saban is the best way for a coach to sanitize his career.

Wonder if Sankey knows about it.

Just a reminder that bowl games start Saturday.  146 of you have signed up for the pick ’em already.  If you haven’t signed up yet, here’s the link for that.

If you don’t sign up, I won’t call you a wimp… but somebody else probably will.

Today, in settling it on the field

While I’m on the subject of playoff expansion (okay, again), I can’t help but share a naked display of what the real motivation behind bracket creep is.

Hint:  it’s not a search for the best.

Today’s quote comes from Scott Boras, the baseball super agent who’s been racing around the winter meetings trying to convince a team to shell out record contract terms for his client Bryce Harper.  While there, though, he’s got plenty of other clients trying to shake fruit out of the money tree, and the going’s been slow.  So, here’s his solution for that problem:

To sell his players Boras needs more teams trying to win, and to do that Boras wants baseball to expand the playoffs–three wild-card teams in each league instead of two, making for “seven playoff levels.” His idea would allow teams barely above .500, or worse, to push for a postseason berth and create an “October Madness” of supposed playoff excitement.

Before you snicker or brush that off as simply a pushy player agent’s way of getting players paid, tell me how that’s any different from Jim Boeheim’s relentless push to expand March Madness because it would give more coaches the opportunity for job security through claims that their teams qualified for the playoffs.

The point here being that it’s about the money — it’s always about the money — and that there are more than just the hands of the owners that reach out for a stake in that.  Owners, players, coaches, they all grab.  The only ones who don’t get a seat at the table are the fans.  Keep that in mind as you tell yourself that an eight-team college playoff is so great it solves everyone’s problems for good.  It won’t, because there’s never enough.

“This has been a weird college football season.”

I really cannot recommend Brian Fremeau’s take on the 2018 regular season enough.  I agree it’s been a weird year for exactly this reason:

We have four undefeated teams heading into bowl season, including three power programs. No power programs made it to bowl season without a loss last year, and only three total had accomplished that feat in the three years prior. There were five undefeated teams heading into bowl season way back in 2009, but three of those five hailed from non-power conferences. Going undefeated through the regular season is rare. This year, with Alabama, Clemson, Notre Dame, and Central Florida all accomplishing the feat, is especially rare.

The 2018 season has been largely devoid of drama. Alabama, Clemson, Notre Dame, Georgia, Ohio State, Oklahoma, and Washington all finished the pre-bowl season ranked among the top eight teams in the FEI ratings. They’re also seven of the top nine teams in the College Football Playoff committee rankings. All seven of those teams were projected as top-eight FEI teams at the beginning of the year. I can’t even boast about that prediction — I didn’t really go out on a limb with any of the picks. Six of those teams appeared among the top seven teams in the preseason AP Top 25 poll as well. If it felt like there weren’t many surprises this year, you’re absolutely right, there weren’t.

It hasn’t been a chaotic year; it’s been the opposite, a very stratified one.  The best teams have separated themselves from the pack by significant margins and that gap is exacerbated because the teams in the next tier haven’t been that great.

… Good teams — the teams that fill out the second half of top-25 polls — haven’t been performing like good teams usually do. Instead, they performed more like the next tier down in quality. That feeds right into the first point – part of the reason why the top teams had staying power this year is that they weren’t challenged by the next tier down.

That’s something I noticed beginning mid-season as I worked up my weekly SEC Power Poll.  The middle part of the conference was a jumble because so many SEC teams after, say, the top two or three were flawed, in some cases significantly, yet, still, I had to pick some program as the fourth best.

Brian picks up on one thing I hadn’t noticed that may have contributed to the overall look, weaker than usual non-conference scheduling.

I compared the 2018 season with each of the last four years, the College Football Playoff era. Through this past weekend, a total of 733 games between FBS opponents have been played. Only five of those games pitted one top-10 team (according to end-of-year FEI ratings) against another. There were eight such games played prior to bowl season last year, and an average of 7.5 such top-10 matchups from 2014 to 2017. There have been fewer games between top-20 teams played this season than any other playoff year as well. Same goes for games played between top-30 opponents. What is the story here?

To be fair, while to some extent that might be the result of deliberate action, in many cases it was simply a case of teams not turning out to be as good as preseason expectations led us to believe.

While the year may not have been that interesting overall, what is of interest to me is how folks are grabbing on to what for now looks like an anomaly to justify major change to the sport, as Andy Staples does here:

… An eight-team playoff with automatic bids for Power Five conference champions would only increase the value of Power Five conference title games, which currently go for about $30 million to $40 million a pop. Imagine if Oklahoma or Texas could have made the playoff by winning the most recent Big 12 title game. Or if the winner of the Ohio State-Northwestern Big Ten title game was guaranteed a berth. So if everyone is chasing the biggest positive incentives, no one would want to ditch their conference title games…

If the wind keeps blowing in the direction that the discussion of 11-2 Georgia as a legitimate final four possibility seems to have taken it, White may eventually get his wish. The incentives have begun to align for an awful lot of people. “There are a lot of things we can point to that maybe help people recognize that four was a lot better than two and two was a lot better than nothing, but we’re still not there,” White said. “I think an eight-team playoff would be great for the game.”

You’d think better in-season scheduling would accomplish much the same in terms of determining quality, but we all know what the movers and shakers mean when they talk about incentives.  In the end, this is all about excuse making for growing the size of the pie and little else.

“It’s harder than ever to defend [the current NCAA model]…”

The NCAA may have its head stuck firmly up its ass when it comes to amateurism, but Dennis Dodd reports that the conferences are already gaming out scenarios in the wake of losing Alston vs. NCAA.

Privately, though, there seems to be a general a feeling the plaintiffs will win, setting off alarms with which the NCAA is familiar. Alston is not the first legal challenge to the NCAA’s hide-bound amateurism model. But the cumulative effect of all those court cases may be a chipping away of the NCAA’s DNA. Without that one-of-a-kind amateurism model that exists nowhere else in the world, critics have wondered whether the NCAA would have any remaining worth.

Reacting to an Alston win, conferences at least have to consider what sort of compensation they would offer. That’s what makes Alston unique. Those plaintiffs have found their best chances of winning are to endorse a model that leaves compensation up to the conferences.

In significant issues like this, conferences don’t agree on much of anything.

Remember, the plaintiff in Alston doesn’t seek relief mandating that conferences have to compensate athletes.  It simply asks the court to prohibit the NCAA from restricting the conferences from compensating athletes.  If that becomes the status quo, every conference would be free to set whatever limits it prefers.  (Ironically, that was the status quo prior to 1956.)

If you think the conferences are money-chasing whores now, wait ’til you see what happens if they have to start sharing the wealth with the hired help.

A nibble here, a nibble there…

Filed under Georgia Football, It's Not Easy Being A Mid-Major, It's Just Bidness, SEC Football, Urban Meyer Points and Stares, What's Bet In Vegas Stays In Vegas

Mark Richt’s not so great week

Regarding Manny Diaz situation: we’re told that among those believed to have interest in replacing him would be former Cincinnati, Auburn (and more) coach Tommy Tuberville.

Diaz’ defense was the only thing holding Miami up last season.  To lose the architect of that, and then take on Mr. “You’ve got to run the ball in the SEC” as his replacement would be sublime from a blogging perspective… which is why that probably won’t come to fruition.  Damn.

Name that caption, the things we do for love edition

I simply couldn’t pass on this one. 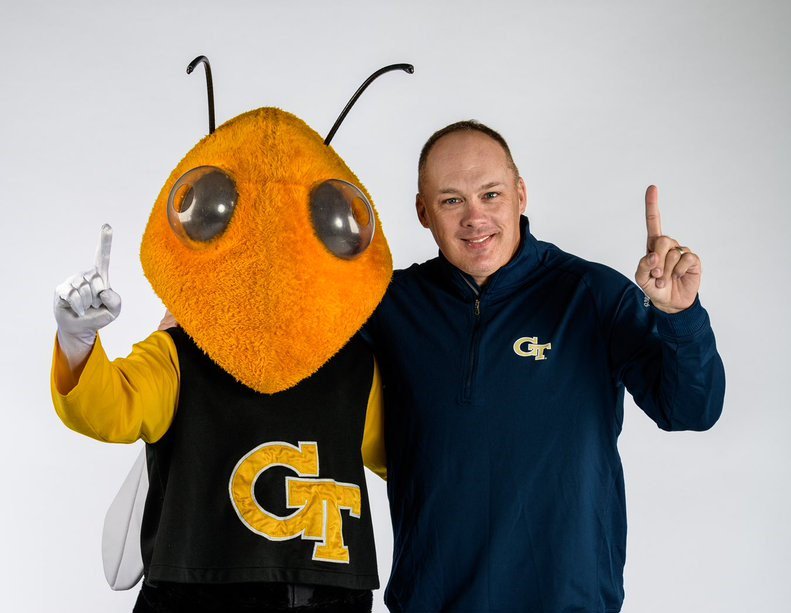 Say what you will, but I don’t remember Paul Johnson stooping to that level of goofy.