I’m just gonna outsource the rules and format from myself.

Here’s a reminder of what few rules there are in casting ballots:

For any newbies out there reading this, it may seem strange and against all your natural instincts as a way to rank college football teams, but trust us, approval voting works.  Plus, the real beauty of this is that you won’t have to spend any time weighing the difference between the nineteenth-best and twentieth-best teams in the country.  By the time you reach season’s end, barring a return to 2007-like chaos, you’ll probably be able to assemble your ballot in less than a couple of minutes.  It doesn’t get much easier than that.  (We don’t have to rent a conference room in Texas and fly all the voters out there each week, either.)

As for the logistics regarding voting each week, here’s how it works:

Easy peasy, amirite? As Andy Staples once told me, “I always tell people that if they don’t like the way I vote, they can rank teams how they please. Thanks to you, they can.”

Say what you will about Georgia fans…

SEC attendance figures from the league:

Georgia is the only program averaging 100% stadium capacity this season

My first reaction to seeing the pick ’em spread for the Auburn game was that it was too big.  The last time Auburn lost a game by 30 or more points was 2018, against Alabama (although they did lose by 29 to Penn State this season).  And Georgia’s play in the last two games certainly gives pause for thought about that kind of margin.

But, weirdly enough, I’m seeing a lot of national writers picking the Dawgs to cover — here’s Sallee, Fiutak and Mandel, for example — and making it sound like they’ll do it with ease.  How are y’all feeling about Saturday?  (Aside from not caring about Auburn, that is…)

After the Mizzou game, the brickbats were flying Searels’ way in the comments section here.  It appears to be the same with Seth Emerson’s mailbag this week ($$).

Disclaimer, I don’t pretend to be a student of the finer details of the game but I’m wondering if current perceived offensive line deficiencies point to Stacy Searels? I know Searels has coached a long time and had good to very good statistical success in the running game most recently at UNC, but do you think there might be a slower development of the line play because of coaching or the fact the line coach just changed from Matt Luke to him and the players are still adjusting to a different style or voice? — Mark L.

There were more than a few pointed questions about Searels this week. There’s probably some confirmation bias going on here. The fans who were disappointed in the Searels hire are seeing the offensive line struggle — not all the time, but enough — and pinning it on him.

Seth throws out some stuff to contradict…

In fact, when I sought out opinions from people I respect in the business — who played the game, and on the offensive line — coaching wasn’t pointed to as the problem:

• The effort seemed there, but the concentration was not, according to one expert, who said the result was poor technique for most of the game — then it magically got better, as if a switch flipped on. The good news is it’s fixable; players just have to play better technique. The bad news is the players didn’t do it in the first place. And it wasn’t on any single player: None of them should have had a winning grade for the game, and it was the pass and the run blocking. They both stunk, then they got better.

… but color me skeptical that’s gonna change many minds.

I will say something that probably deserves more attention is that the o-line is working under its third position coach in four seasons, with one of those being a pandemic-shortened one, to boot.  Maybe, just maybe, that should be a consideration in this debate?  Eh, who am I kidding here?

The ring’s the thing.

Another NIL triumph for Stetson Bennett…

Bennett signed a deal recently to represent Shuman Farms, a major producer of sweet onions — the Vidalia variety, in particular — in South Georgia. It’s one of the first agricultural partnerships in the country in the rapidly expanding world of NIL deals, according to Bennett’s agent, Dan Everett of ESM.

Bennett, star of Georgia’s 2021 national championship team, is thought to be one of the top-paid players in college football because of his many NIL relationships. This latest deal is thought to have taken him over a $1 million in endorsements. On3.com, which tracks NIL, currently lists Bennett as having brokered $963,000 in deals through ESM.

We’ve come a long way from AJ Green, that’s for sure.

The ad’s punchline is all you need to watch.

The Pirate has a fix he’d like you to know about.

Mike Leach’s “ambitious plan” to solve the player compensation issue in college football has so many holes in it — antitrust, academic, roster management — that it’s never going to be taken seriously.

Leach believes players should have a choice when entering college: You either join as an (1) amateur or you join as a (2) professional.

“With professionals comes responsibility,” he says. “Yeah, you will potentially make more money. But you are drafted and can be traded. That’s what professionals do. This college football group [of administrators], they are all shocked by that. Why are you shocked by it? Name one league of professionals who don’t do it that way.”

How many leagues of professionals have amateur players?  Eh, Leach is a coach.  And football coaches are always going to let their control freak flag fly, so I get where he’s coming from with this:

Under Leach’s plan, amateurs follow similar rules currently applied to college athletes. They are unpaid and they can freely transfer. However, amateurs would receive a $100,000 bonus once they graduate from the school with which they originally signed. If you transfer, Leach says, you’d give up the right to earn the bonus.

Those choosing to be professionals would be paid a salary from the school, sign a binding contract, and could be traded and cut from the team. They still must attend school. School salary pools are structured similar to the NFL, where franchises are limited in their spending.

Like I said, this is DOA.  There’s no collective bargaining agreement with the players.  And there’s no antitrust exemption.  Speaking of which, Leach does get this part right:

“They can’t even solve their own problems,” Leach says of Congress. “They don’t know the first thing about football, and we’re going to defer to a bunch of people who don’t know what they’re doing? What is the time frame? I don’t think they get it accomplished, but in the event they do, we’ll all be dead.”

I presume most of y’all heard about the false bravado emanating from one of Auburn’s offensive linemen yesterday.

Auburn center Brandon Council on Georgia's defensive front: "If we can keep them out of their third-down packages, we can demolish them."

I know the natural reaction to stuff like that is to call that perfect bulletin board material, but who are we kidding here?  Auburn’s offense is averaging ***checks notes*** 17.5 points per game against FBS opposition, so an offensive dynamo the Tigers aren’t.  (NOTE:  Per Barrett Sallee, it’s even more anemic against P5 teams:  “The Tigers are averaging 2.6 points per game in regulation over their last eight games against Power Five opponents, including goose eggs in regulation the last two weeks.”)

Really, it puts me more in mind of this epic quote: 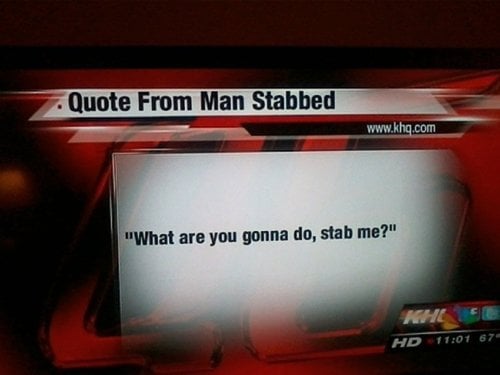 These are two separate plays.

There's absolutely no place in the game of football for dirty plays like this. And that's exactly what it is, it's dirty.

This is the complete opposite of the way a backside cut is taught and it needs to be addressed by the SEC league office ASAP pic.twitter.com/bzzdPxRIoj

Like everyone else, I saw the cut block on Carter.  However, I didn’t catch the one on Walthour.

I don’t think either was malicious.  I do think Mizzou’s line technique is lazy, bordering on atrocious.  And the only way to clean up shit like that effectively is to call the penalties!  If you don’t, you’re just enabling more of the same, with a greater likelihood of injury to come.

C’mon, SEC, get it together.  Clearly Missouri’s o-line ain’t.

Josh and Graham interview George Foster about the difference in the two blocking schemes in this informative clip:

It’s a little frustrating to follow, because Foster’s feed is somewhat hinky, but he provides a lot of stuff to think about.

I mentioned in Monday’s Observations post that one encouraging thing I saw was both McIntosh and Milton actually breaking tackles.  Some of y’all expressed skepticism about that, but, hey, don’t take my word for it!

UGA combined for 11 broken tackles on the ground. Every single damn one of them came after halftime (47.8%). Behind a solid 2.7 rush yard before contact average, UGA captured 5 explosives and 16 successful runs on its 23 2nd half carrieshttps://t.co/eg7p36GTrp pic.twitter.com/23GoyPBODH

Like it or not, the Dawgs finally gained some traction in the running game in the second half against Mizzou.  Whether that was due to a change in scheme, or the o-line waking up, or something else, I can’t say.  I just hope the coaches know and bottle it for use against Auburn.